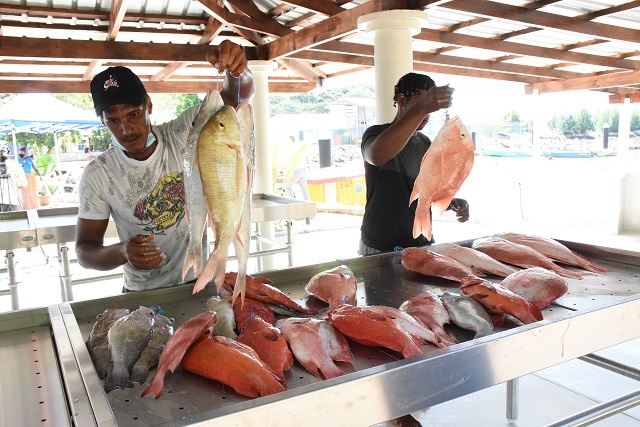 The proposes a set of measures to regulate fisheries for licensed fishers and recreational and sports fishers. (Seychelles Nation)

(Seychelles News Agency) - Seychelles is paving the way for the introduction of measures to rebuild and maintain healthy fish stocks through the launch of the first Mahe Plateau Trap and Line Fishery Co-Management Plan.

The Mahe Plateau supports a demersal artisanal fishery that provides food and economic activity for Seychelles. The main species targeted by the handline fishery are snappers, groupers and emperors, whereas the trap fishery targets rabbitfish, parrotfish and emperors.

The plan, which seeks to take a co-management approach to fisheries management, proposes a set of measures to regulate fisheries for licensed fishers and recreational and sports fishers.

The assistant manager of fisheries management at the Seychelles Fishing Authority (SFA), Elisa Socrate, said that commercial fishermen have expressed concerns for sevearl years that the fish they catch are becoming smaller and the quantity is decreasing.

"Sparked by this, SFA carried out several stock assessments through which it was discovered that certain areas of the Mahe Plateau were being overexploited and as such needed to be managed," Socrate said.

To do this, the authoriteis will use an ecosystem approach to fisheries management, which needs the involvement of all partners and not only decision makers, said Socrate.

The reduction in catch rates and other evidence of overfishing has prompted the introduction of measures proposed in the Mahe Plateau Trap and Line Fishery Co-management Plan to improve the sustainability of the fish stocks. Such measures include a size limit for emperor red snapper and green jobfish, two of the most commercially important species.

The measures include a size limit for emperor red snapper and green jobfish, two of the most commercially important species.

The chief executive of SFA, Nichol Elizabeth, said that the fact that a lot of fishermen are catching small emperor red snappers and green jobfish is affecting the future of the species.

"This is why we are targeting these two species first. In the future, we will add more species. We will look for finance to carry out stock assessments on different species. We are currently doing one on coral fish, and grouper. If we see that things aren't going well for them, we will accelerate the process under the Mahe Plateau management plan," said Elizabeth.

Consumers will need to ensure that they are buying fish of the two species that meet the necessary length.

The first phase of the plan will involve the education and sensitisation of fishermen and the general public. This will happen during the last three months of 2021.

"Monitoring on landing sites will start during the first quarter of next year and hopefully, by the second quarter of next year, we will start implementing it in a stronger manner. for this year, in the next coming three months, we will be working more on education and awareness, though we will be going on site. This will be a long process, and as such it will take some time," said Elizabeth.