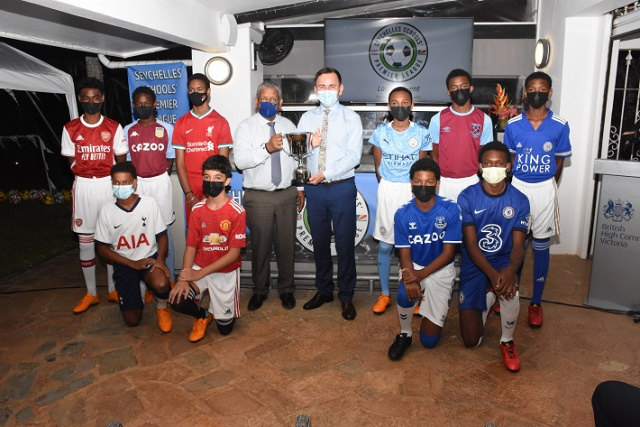 (Seychelles News Agency) - Under 15-year-old boys from 10 secondary schools in Seychelles will participate in a first-ever school-age league football competition using the names of well-known teams from the English Premier League.

The initiative, called Seychelles Schools Premier League, was launched by the British High Commissioner on Thursday.

In the tournament, 10 secondary schools from the main island of Mahe will dress up as current Premier League sides in the competition from which the winner will be crowned after 10 weeks.

The British High Commissioner, Patrick Lynch said that the "league is all about shared history, shared values and tonight, our shared love for football."

A draw was held to determine which school would represent which premier league team. The teams are: Arsenal, represented by Perseverance; Aston Villa by English River; Chelsea by Beau Vallon; Everton by Pointe Larue; Leicester City by Anse Royale; Liverpool by Plaisance; Manchester City by Belonie; Manchester United by Independent School; Tottenham Hotspur by Mont Fleuri; and West Ham by Anse Boileau.

During the ceremony, the teams were presented with the kit and equipment they will use in the tournament, which will run from October 8 to December 3. The competition will take place during the weekends at various locations.

The British High Commissioner said the aim of the tournament is to help the children to build their self-esteem, promote health and exercise as well as to involve families and the community.

This is not the first interschool tournament done in Seychelles, as there are already tournaments organised by the Ministry of Education in collaboration with the Seychelles Football Federation.

The chief executive of the Football Federation, Georges Bibi, told SNA on Friday that the Seychelles Schools Premier League will not replace the existing inter-school tournaments, which caters to different age groups.

"This tournament will be for the under 15 and is a programme organised by the British High Commission. The Federation is bidding to host the Cosafa (Council of Southern Africa Football Associations) under-15 championship and this tournament will go towards preparing for that," said Bibi.

He said among the prizes for the winners at the end of the year will be a chance to go to England and even visit the clubs which their schools are representing.

While the league has been launched for school on Mahe only, teams Praslin and La Digue, the second and third most populated islands, are expected to be launched in November, and a league for girls in March next year.

Liverpool goalie Simon Mignolet keeps up his training – on a Seychelles beach!