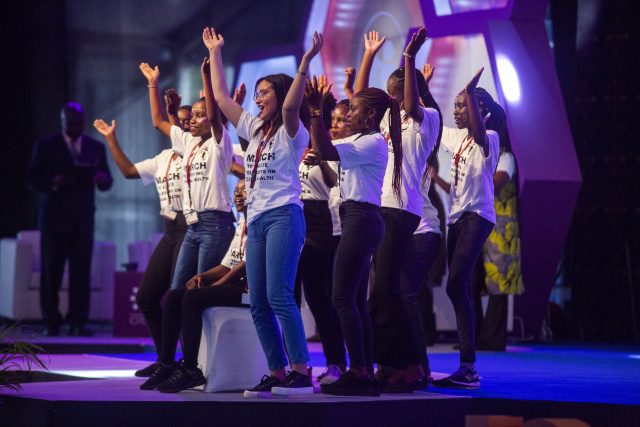 A group of youth perform a dance at the Kenyatta International Convention Centre (KICC) in Nairobi, Kenya, on 12 November 2019, during the opening ceremony of the International Conference on Population and Development (ICPD)..(ALBERT GONZALEZ FARRAN / UNFPA)

(AFP) - President Emmanuel Macron will host a conference on Africa on Friday billed as an attempt to engage directly with young people as he aims to readjust France's relationship with the continent.

Instead of other heads of state and premiers, Macron is inviting hundreds of young businesspeople, artists and sports figures to the southern city of Montpellier.

The aim is "to listen to the words of African youth" and "to leave behind obsolete formulas and frameworks", said a French presidential official who asked not to be named.

The meeting comes at a delicate moment between France and many of its former colonies in French-speaking Africa, as a row rumbles on over a decision to cut visas to citizens of Algeria, Morocco and Tunisia.

Algeria recalled its ambassador after Macron reportedly said the country was ruled by a "political-military system", while tensions have erupted between France and Mali over plans to deploy Russian mercenaries as part of an anti-jihadist fight.

The new format hints at the frustration felt by France, which has held summits with African leaders since 1973, with the political leadership of some countries.

Roughly 3,000 participants including more than 1,000 young people are expected in Montpellier for discussions on economic, cultural and political issues.

Macron is set to debate with a panel of young people chosen after months of dialogue led by the Cameroon intellectual Achille Mbembe, who is in charge of preparing the meeting.

"Thorny issues will be on the table," the French presidential official said, adding that "the current political context makes the discussion particularly sensitive".

French officials are promising concrete proposals from a report that Mbembe submitted to Macron on Tuesday which said France was "too disconnected" from new political and cultural movements among African youth.

He added that among all the tensions, "none was more corrosive than the presumed support France gives to tyranny across the continent".

After receiving the report, Macron expressed hope in a tweet that the summit would see "direct and open dialogue from youth and from diasporas."

Macron vowed in a November 2017 speech in Burkina Faso's capital Ouagadougou to take a new approach to Africa, where France would no longer tell Africans what to do.

He has also made a point of reaching out to English-speaking countries to build sway beyond France's former colonial possessions.

On Thursday, Macron will meet in Paris with former Nigerian president Olusegun Obasanjo, still a hugely influential figure on the continent.

Since the 2017 speech, cultural artefacts pillaged from Benin have been returned and France has announced plans to reform the CFA franc, a currency used in several countries that is guaranteed by France.

Meanwhile, a report commissioned by Macron acknowledged France's "overwhelming responsibilities" over the 1994 genocide in Rwanda, an issue that has poisoned relations between Paris and Kigali.

"Since the speech in Ouagadougou, the lines have moved symbolically, there have been important gestures," said Amadou Sadjo Barry, a Canadian philosopher of Guinean origin.

While the Montpellier format may help bring some new life into France-Africa relations, Barry described the meeting as "a symbolic defeat for Africa".

"Why is it still that the human, political and economic future of the African continent is being discussed in France? Why don't African governments themselves listen to the concerns of their populations?" he asked.

Africa » Be a reporter: Write and send your article » Subscribe for news alert
Tags: France, Africa