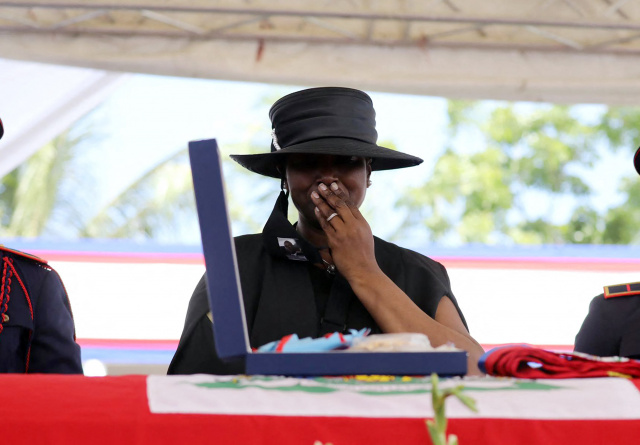 Martine Moïse grieves during the funeral for her husband, slain Haitian President Jovenel Moïse, on July 23, 2021, in Cap-Haitien, Haiti, the main city in his native northern region. Moïse, 53, was shot dead in his home in the early hours of July 7.
Valerie BAERISWYL / AFP

(AFP) - The widow of slain Haitian president Jovenel Moise gave witness testimony Wednesday to a magistrate investigating the July assassination of her husband, an attack in which she herself was seriously wounded.

Former Haitian first lady Martine Moise, wearing a black dress, arrived with a large entourage of police and heavily armed foreign bodyguards at the prosecutors' office in the capital Port-au-Prince, where she spoke for several hours with investigating judge Garry Orelien.

Several dozen supporters of the former head of state gathered in front of the building to show support.

"I answered all the questions that were put to me," Moise said after her hearing.

"Everyone says that in our country, you can't get justice. Even if I am told that, this is where I must start to seek justice," she added, addressing the few journalists who had managed to enter the building.

She said she was prepared to respond to any further requests for hearings. "Whatever the case, I'm ready. I have nothing to be ashamed of," she said.

Afterward, her bodyguards ushered her into one of several vehicles which immediately left an area of the city center that has been dominated by crime gangs for several months.

Seriously wounded by gunshots, the former first lady was evacuated to the United States within hours of the July 7 attack by armed commandos at the presidential residence.

She had briefly returned to Haiti to attend her husband's July 23 funeral in Cap-Haitien, the country's second largest city, before returning to Florida to undergo several more operations.

She came back to Haiti on Friday evening, spending a few hours on Monday in the southwest of the country, which had been devastated on August 14 by an earthquake that killed more than 2,200 people.

Three months after the assassination, doubts remain over who ordered the attack, during which not a single police officer guarding the president was injured.

Four senior Haitian law enforcement officials have been detained and a total of 44 people, including 18 Colombians and two Americans of Haitian origin, have been arrested in connection with the investigation.