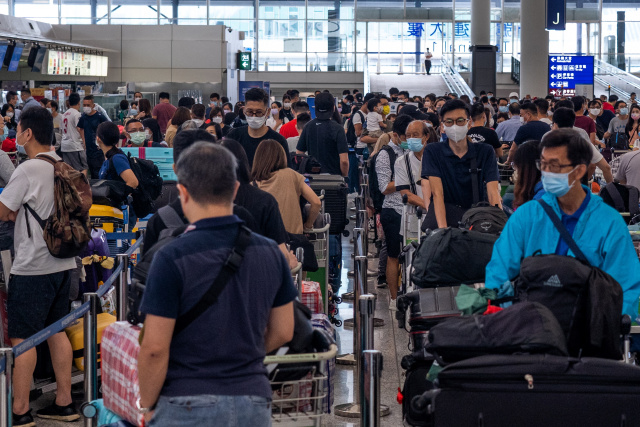 People pack the check-in area for their flight to Britain at Hong Kong's International Airport on July 18, 2021, the day before a deadline by the British government to allow Hong Kongers the right to visit the UK if not eligible to enter under an existing immigration route. Twice a day Hong Kong's virtually deserted airport fills with the sound of tearful goodbyes as residents fearful for their future under China's increasingly authoritarian rule start a new life overseas, mostly in Britain. (Bertha WANG / AFP)

(AFP) - The UK government on Thursday announced a dramatic reduction to its coronavirus travel "red list", scrapping bans on foreigners travelling to England from 47 countries.

Under the new rules that come into effect from 0300 GMT on Monday October 11, only seven countries -- Colombia, the Dominican Republic, Ecuador, Haiti, Panama, Peru, and Venezuela -- will remain under the restrictions.

Removal from the "red list" for the 47 countries and territories, including Brazil, Mexico and South Africa, means passengers will no longer be required to enter hotel quarantine.

Transport Secretary Grant Shapps said the move was possible because of "the increased vaccination efforts around the globe".

The government also announced it was extending inbound vaccinated arrivals to a further 37 countries and territories including India and Turkey.

The new rules mean fully vaccinated individuals entering England from the 37 locations will be exempt from quarantine, a pre-departure test and a day-eight post-arrival test.

British and Irish nationals and those living in the UK are allowed to travel from red list countries, but must quarantine in a hotel for 10 days on arrival.

The UK government in London sets health and transport policy for England only. The devolved parliaments in Scotland, Wales and Northern Ireland set the Covid travel policies for their regions.

They have largely followed previous rule changes for England.