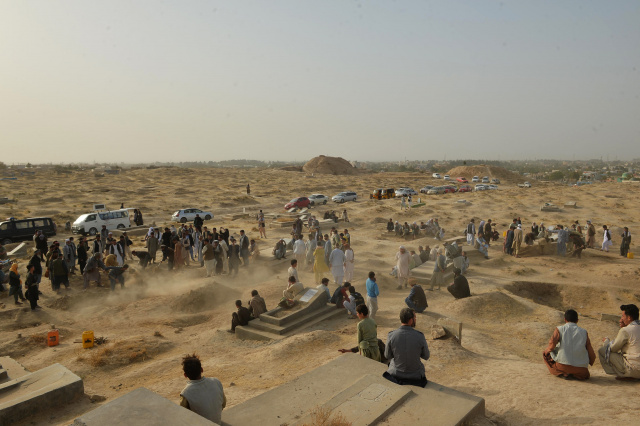 Relatives and friends stand next to graves of victims of yesterday's suicide bomb attack on worshippers at a Shiite mosque, in which at least 55 people died, at a graveyard in Kunduz on October 9, 2021. (Hoshang Hashimi / AFP)

(AFP) - G20 leaders gathered Tuesday for a virtual summit focused on addressing the looming humanitarian crisis in Afghanistan, with the EU kicking off proceedings by announcing a one-billion-euro ($1.2-billion-euro) aid package.

US President Joe Biden and Indian Prime Minister Narendra Modi were among those dialling in to the meeting hosted by Italy, although Chinese President Xi Jinping and Russian President Vladimir Putin sent representatives.

The money adds 250 million euros to a 300-million-euro sum previously announced by the EU for urgent humanitarian needs, with the remainder going to Afghanistan's neighbouring countries taking in Afghans fleeing the Taliban, a statement said.

It stressed that the EU funds are "direct support" for Afghans and would be channelled to international organisations working on the ground, not to the Taliban's interim government which Brussels does not recognise.

After a previous G7 meeting on Afghanistan following the August takeover by the Taliban, Italian Prime Minister Mario Draghi had been pushing for a broader discussion involving other world powers.

The G20 includes the United States, EU, China, Turkey, Russia, India and Saudi Arabia among others.

Tuesday's conference came as the Taliban held their first face-to-face talks with a joint EU-US delegation in Qatar, as the hardline Islamists continue their diplomatic for international support.

International aid has been blocked to Afghanistan since the Taliban returned to power following the withdrawal of US and other international troops after 20 years of war.

The country's assets held abroad have been frozen, while food prices and employment is rising, prompting warnings of a humanitarian disaster once winter arrives.

The United Nations and Qatar, a key broker in Afghanistan which has also hosted talks between the US and the Taliban, were also invited to Tuesday's closed door talks, after which Draghi will hold a press conference in Rome.

The G20 meeting will also address the issue of security.

Draghi, whose country was a key player in the NATO mission in Afghanistan, said last month leaders would also look at measures the international community can take "to stop Afghanistan from again becoming a hotbed of international terrorism".

The Taliban regime, still yet to be recognised as a legitimate government by any other country, is itself facing a threat from the Islamic State-Khorasan (IS-K), who have launched a series of deadly attacks.