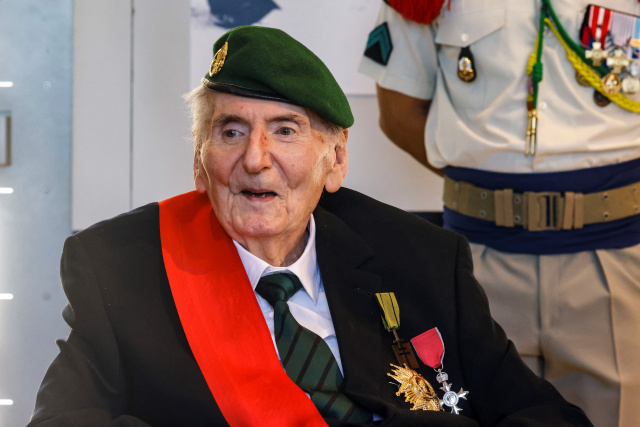 The death of Hubert Germain marks a sobering point in a chapter in French history that saw the country capitulate to Nazi forces in 1940, occupied but then liberated four years later with the help of resistance fighters inspired by de Gaulle.

"I want to inform you that Hubert Germain, the last surviving member of the Order of the Liberation, has died," Defence Minister Florence Parly told French lawmakers.

"It's an important moment in our history," she said.

President Emmanuel Macron "bows down in front of the life of this figurehead of Free France," the Elysee Palace said in a statement.

Germain was among 1,038 decorated with the Order of the Liberation for their heroism by de Gaulle, the Resistance leader and later president of France.

Shocked by French collaborationist leader Philippe Petain's call to lay down arms against the Germans, Germain was inspired by de Gaulle's call for resistance on June 18, 1940, made from BBC studios in London.

As a member of the French Free Forces and the Foreign Legion, Germain took part in key battles at Bir-Hakeim in Libya, at El Alamein in Egypt, and in Tunisia.

He also took part in the decisive French-led assault on Mediterranean beaches in August 1944, setting foot on home soil for the first time in years.

He fought for the liberation of the southern city of Toulon, the Rhone Valley and Lyon in central France, moving to the Vosges mountains and Alsace in the east, and ended the war in the southern Alps.

Of the Resistance heroes honoured by de Gaulle, a third died in combat, while 80 percent of the survivors were wounded in action.

In his last public appearance, Germain met Macron in June this year at Mont Valerien, the hilltop fortress west of Paris where German forces executed more than 1,000 captured fighters and hostages.

Germain was helped from his wheelchair to accept a red sash from Macron, who kissed him on both cheeks. Germain then saluted the president before putting on his military cap.

"Hubert Germain, the last of the 1,038 members of the Order of the Liberation, is dead," Macron wrote on Twitter.

"Mont Valerien will welcome the body of a man who was a resistant from the very beginning, a hero of Bir-Hakeim and the Provence landings, who reconquered our freedom and rebuilt our homeland."

Macron will preside over a ceremony for Germain on November 11 -- Remembrance Day marking the end of World War I and the victims of conflict -- at the Arc de Triomphe in Paris and then his burial at Mont Valerien, his office said.

A separate ceremony will take place at the Invalides memorial complex in Paris in the following days, it added.

"The nation has lost one of its most illustrious servants to whom we are indebted for his honour and courage," said general Thierry Burkhard, chief of staff of the French armed forces.