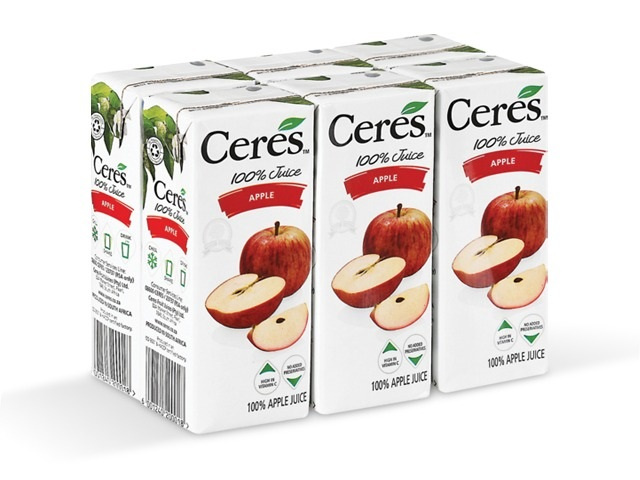 Apex told SNA that it has done all in its power to recall and collect all the Ceres 100% Apple Juice distributed to retail shops. (Apex hotel supplies)

(Seychelles News Agency) - Apex hotel supplies in Seychelles is asking anyone who bought Ceres 100% Apple Juice to return the product to the company for a refund after a notice that it may contain toxic levels of a fungus.

The announcement from Apex follows a notice issued by the Competition Commission of the Common Market for Eastern and Southern Africa (COMESA) on Wednesday that said South Africa-based Pioneer Foods is recalling some batches of Ceres 100% Apple Juice after laboratory tests found patulin levels higher than the legal threshold of 50 parts per billion (microgram/kg).

Apex told SNA that it has done all in its power to recall and collect all the Ceres 100% Apple Juice distributed to retail shops. All the juices are now sealed at its warehouse. The company said that it reacted immediately after the notice was issued to ensure that no-one was affected.

According to the World Health Organisation (WHO), patulin is a form of mycotoxin – a toxic substance produced by a fungus. Consumption of high levels of patulin may cause nausea, gastrointestinal disturbances and vomiting.

The Ministry of Health told SNA on Wednesday that the issue with the Ceres juice has been referred to the Food Control Unit and that the matter is being investigated.

The Ministry said that should the product be seen as harmful for human consumption, local laws allow the health authorities to completely ban the juice from entering Seychelles, an archipelago in the western Indian Ocean.

Aside from Seychelles, the product has been recalled from five other COMESA markets which are Kenya, the Democratic Republic of Congo, Uganda, Mauritius, Zambia and South Africa.

Ceres Fruit Juices Pty Ltd, trading as The Ceres Beverage company, is a beverage company based in Paarl, South Africa. The Company produces fruit juice and other fruit-based products and is a subsidiary of Pioneer Foods.