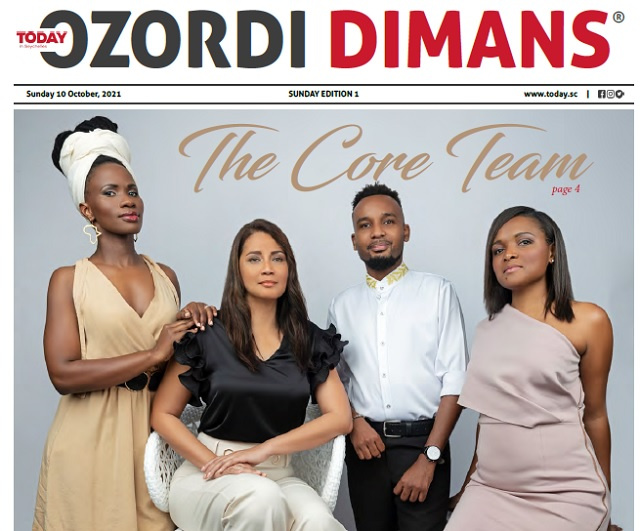 The Sunday publication, a digital magazine, is produced by an entirely different team of journalists than the Monday-through-Saturday paper. (Today Publishers)

(Seychelles News Agency) - The publishing company behind "Today in Seychelles" has added a Sunday publication to its schedule with the unveiling of "Ozordi Dimans," or "Today Sunday."

The Sunday publication, a digital magazine, was launched on Sunday October 10. It is produced by an entirely different team of journalists than the Monday-through-Saturday paper, said Veronica Maria, the managing director of Today Publishers.

"Our daily newspaper is not published on Sundays and so for a while, our readers have been demanding that we produce something for that particular day," Maria told SNA on Tuesday.

The Sunday magazine is different from "Today in Seychelles" in that it does not feature news stories but instead brings its readers features, including human interest pieces, history, culture, fashion, health, and education pieces.

The digital magazine will be available via a subscription service but at the moment it is being offered free of charge.

"At the moment we are working on the subscription for 'Ozordi Dimans' and we hope to announce it soon. We are looking at giving the people to subscribe for a bundle with both papers under one subscription or allow our readers to subscribe to the magazine on its own," said Marie.

The managing director of Today Publishers said the company wanted to create something different where people will be able to read various stories with a lighter tone, compared to usual news items published daily.

The launch of the magazine was originally to coincide with the 10th anniversary of "Today in Seychelles," which was launched in March 2011. The daily newspaper is also being distributed digitally only.

"We wanted to release it for our anniversary but unfortunately with the COVID-19 pandemic, we could not make it happen," said Maria.

She added that the delay allowed the company to seek more feedback and better prepare for the magazine and so far the feedback has been positive.

"As one of our goals is to always innovate, we decided that this would be a go option and so last year we started working on the idea," Maria added.