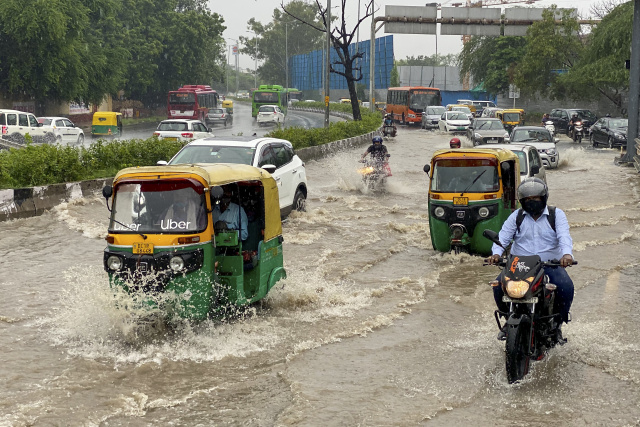 Motorists make their way along a waterlogged street during a downpour in New Delhi on September 11, 2021. (Jewel SAMAD / AFP)

(AFP) - At least 25 people have died in landslides and floods triggered by heavy rains in southwestern India, officials said Sunday, as rescuers scoured for survivors in muddy debris and the military flew in emergency supplies.

Residents were cut off in parts of the coastal state of Kerala as the rains, which started to intensify from late Friday, swelled rivers and flooded roads.

Some 11 bodies have been found so far in Idukki district and another 14 in Kottayam district, officials told AFP, after the areas were hit by landslides and flash floods.

Thousands of people have been evacuated and at least 100 relief camps have been set up, Kerala's Chief Minister Pinarayi Vijayan said Sunday.

The army, navy and airforce are assisting with flood relief and rescue operations. Officials could not say how many people were missing.

"It was my livelihood. Everything is gone," a distraught man told Kerala news channel Manorama TV in Koottickal town in Kottayam, which was hit by a landslide.

"The hill broke off near us. There has been a lot of damage and loss. The house has gone. Children have gone," a woman from Koottickal added.

Prime Minister Narendra Modi tweeted his condolences and said authorities were working to help those who were affected or hit by the deluge.

The India Meteorological Department said the heavy rains, caused by a low pressure area over the southeastern Arabian Sea and Kerala, were expected to ease on Monday.

In northern India, some states including the Himalayan regions of Uttarakhand and Himachal Pradesh are forecast to experience "heavy to very heavy rainfall" in the next two to three days, the weather bureau said.

The northern weather system would be caused by a low pressure area over Afghanistan and its surroundings interacting with strong winds from the Bay of Bengal, it added.

In 2018, nearly 500 people were killed in Kerala when it was ravaged by the worst floods to hit the state in almost a century.