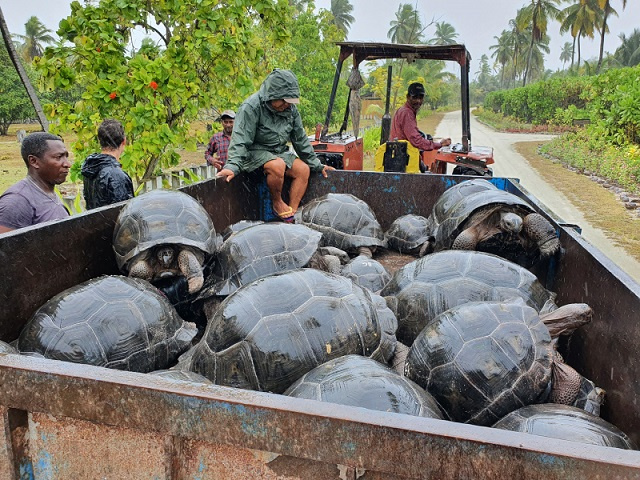 With the help of the IDC for transportation, ICS released the Aldabra giant tortoises in an area where food for the species is available. (Island Conservation Society)

(Seychelles News Agency) - Twenty-seven Aldabra giant tortoises, an endemic species of Seychelles listed as vulnerable, were recently released on the wild side of Desroches island under a breeding programme.

The release was the highest number put into the wild part of Desroches island under a programme managed by the Island Conservation Society (ICS), a not-for-profit organisation.

The communications and public relations manager of ICS, Fabienne Fardial, told SNA that the tortoises were released after the Desroches Foundation Board approved that the young tortoises in the breeding programme to be released at 9 kg instead of 25 kg.

"The 9 kg tortoises were seen as too heavy and big to be stolen. We had quite a lot of tortoises weighing 9 kg ready to be released into the wild. At this weight, the tortoises can fend for themselves and are not vulnerable from predation," said Fardial.

With the help of the Islands Development Company (IDC) for transportation, ICS released the Aldabra giant tortoises in an area where food for the species is available. The area has Indian and beach gardenia that grow in abundance and there is less human interference.

Fardial said that although no specific studies have been done for the Desroches' population, in general once a giant tortoise reaches a certain weight it doesn't have to fear any predator.

"At 9 kg the tortoises have no threat except for falling coconuts and human activities. Moreover, these are very independent and resilient animals that have no problem searching and finding food in the wild," she told SNA.

Free ranging tortoise populations have been established on various islands of Seychelles, an archipelago in the western Indian Ocean. The species play an important role in the ecosystem of the islands as they are important grazers, disperse seeds, and they move and fertilize the soil. A large number of individuals is also important to maintain a good genetic diversity and ensure a healthy population.

ICS initiated the tortoise breeding programme in 2010 with 55 toroises to ensure the long-term survival of the species. To carry out the programme, ICS keeps 20 adult tortoises in a large breeding pen which is checked several times per week to see if there are new nests. Once a nest is located, the ICS team will not intervene and lets the eggs hatch naturally. So far 134 hatchlings have successfully been bred under the programme.

Today, the population on the island comprises about 160 individuals and, if the forest habitat is enhanced, Desroches could host more than 1,000 tortoises.

Conservation » Be a reporter: Write and send your article » Subscribe for news alert
Tags: Island Conservation Society, Desroches Foundation Board