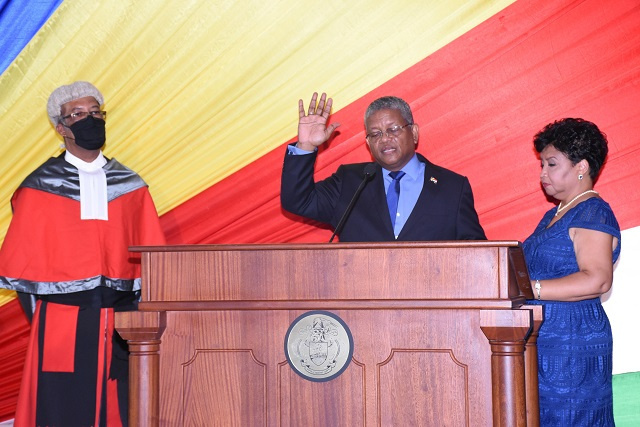 Ramkalawan was sworn in as the President of Seychelles on October 26 last year. (Seychelles Nation)

(Seychelles News Agency) - SNA sat down with President Wavel Ramkalawan just before the one-year mark of his presidency on Tuesday, October 26.

The president said the island nation is on the right economic track, despite the COVID-19 headwinds. He said he hopes not to close any part of Air Seychelles but will rely on the analysis of two recently appointed administrators. And he said he would tell the U.S. and China to reduce their emissions at the upcoming COP26 UN Climate Change Conference.

SNA: It's now a year since you took office. Would you say that you have delivered on your promises?

WR: Firstly, it is important to clear something that seems to be confusing a lot of people. A manifesto is not a one-year plan nor a six-month plan; it is a five-year plan. What we said then is that during our five-year mandate, this is what we want to deliver to the people of Seychelles.

With regards to what happens in Seychelles, I don't have any doubts that we can achieve our goals. Today I can confirm, that our net reserve is higher than it was at the beginning of 2020. The net reserve of Seychelles is about SCR455 million, compared to 430 million in 2020. Furthermore, the interest rates at local banks have gone down, meaning people will get a lower interest rate when they take out a loan. On our side, we will do all we can to reduce the cost of living.

WR: Well, I feel that when I took office, the biggest challenge was COVID. The airport was practically closed; tourist arrivals were down by 75 percent, most small guesthouses were not functioning and the government was paying the salary of almost everyone.

So, the first thing we did was to focus on COVID-19. In December, when I visited Abu Dhabi, the first item on my agenda was vaccination against COVID. The vaccine actually arrived in Seychelles before Christmas, even before we had our first community transmission. We began our vaccination programme in January and this allowed us to re-open our borders despite strong opposition. Along with the cabinet and in consultation with the health authorities, I took that decision. So, for me, the biggest accomplishment was the way we handled the pandemic and re-opened our borders.

We removed the country from a deficit of SCRR351 million in December and today we have a balance of over SCR1 billion because of the way we managed the economy. Of course, with every decision we make, there will be people who are adversely affected, but I will not have any regrets about the decisions we took, despite it being tough. That is because we are a government that wants the people to take responsibility.

I was encouraged through a recent television program, where after we stopped the unemployment relief scheme, a young lady said that after URS stopped, she has managed to start her own business and is doing very well. This is the kind of Seychellois we want, those who get up and make things work.

In agriculture, another success we made was to increase the production of pork by 22 percent and the production of chicken by 2 percent. With the agriculture programme on Coetivy, we will see more increase in local production and we will also be moving into selling of animal parts, which will reduce importation. We also have various investments in tourism coming up, such as the hotel at Anse La Mouche, one on Ile Platte, Banyan Tree's renovation and one on D'Arros island.

Next year people will start seeing things happen as we look to rebuild the economy, which will include the construction of new houses and other projects.

SNA: Many of your supporters were looking for drastic changes when you took over. What is stopping that from happening?

WR: That depends on what kind of drastic changes the supporters are looking for. What I want to show is that I will not let emotion direct my administration; we will let good sense and reason direct things. It's not because you as a supporter have been victimised or had certain issues with a particular person, that we should just fire someone. That person is also a Seychellois and also needs to feed their family.

For me, I think it's the mindset of people that needs to change. In fact, I will use this opportunity to say that in my first year, I have refused to meet people for their individual problems like was done by some presidents in the past. Our country must work with a structure where people can feel recognised for their positions and qualifications.

Decision makers must also know that they have responsibilities to ensure that when someone writes a letter to them, they get an answer. I have seen people getting angry at me because they need to speak to someone who was part of the previous administration and to that I say that we cannot continue to live with this type of hatred.

SNA: The future of Air Seychelles is one of the issues you have to deal with and it seems that the government does not know what to do with it at the moment. What's your reaction to that?

WR: The government wants to make the best decision possible. When we took over, there was the debt with the bondholders and there was Etihad and various complications. For us, we are thinking of all the Seychellois employed at Air Seychelles and also looking at the airline. With the court case and all other issues, what we want is to get the best solution. We do not want to close any part of it and I am confident that the two administrators appointed will make that decision and it will be what's best for Seychelles.

SNA: The fight against drug trafficking and corruption was highlighted when you took office. Do you feel there has been tangible progress in that area after one year?

WR: Oh, yes. Sometimes people wonder why we always talk of the past. We have to. The issue of drug trafficking was not one that we created but inherited. It is up to us to deal with it. I was shocked when I took over, to find out how far drug traffickers had infiltrated the government. They control ANB (Anti-Narcotics Bureau), Customs, the Postal Services, the Coast Guard, the Air Force and the police. That's the length of their network, but when we came in, we started to break off these networks.

I will say that I am satisfied with what has happened during this year. Today, heroin is not too prominent in the country. We stopped a couple of boats bringing in drugs even though some of them threw the drug away before being arrested. But, to me, it does not matter whether they threw it away or destroyed it. What matters is that the drugs did not enter the country. I am also happy to see that all authorities involved are working in collaboration and sharing information, to better tackle this problem.

Where corruption is concerned, I will say that the procedures where there were corrupt practices have been taken up by the ministries. There were a lot of issues especially where procurement is concerned and we are looking at this closely and while we cannot eliminate all corruption at once, we are working hard to stop it.

SNA: Earlier this year you gave the Anti-corruption Commission an ultimatum. Are you satisfied with their work?

SNA: Seychelles' geographic location seems to always attract the interest of foreign countries seeking to take advantage of it, and two of the first countries you met with were India and China together with growing relations with the United States. Where does Seychelles situate itself in this regard?

SNA: On a political note, the party you created the Seychelles National Party (SNP) is no longer a political party recently, does that mean that you will take over the presidency of the Linyon Demokratik Seselwa (LDS)?

WR: SNP needed to go through this when we joined others to create LDS. So, now that LDS is at State House and also holds a majority in the National Assembly, it's normal that SNP is closed down. LDS is now waiting for the possibility of a convention, but at the moment, Roger Mancienne (the current Speaker of the National Assembly) is the leader. After that when it's time to elect a new leader we will see. Despite the fact that as president, I don't involve politics in my work, I cannot forget that it was LDS who gave me the chance to be its presidential candidate and as such, I feel that there is much I can contribute to the party.

SNA: Recently, the government suspended the 13th month salary for public workers and this has been met with discontentment leading to protestation in Victoria. What's your reaction to this?

WR: The 13th month salary goes back to our principle of productivity. That is was what the initial plan was for the 13th month salary when it was first introduced. But then politics got involved and everyone got it regardless of whether they deserve it or not.

We are working on a way to give the 13th month salary based on each individual's performance. We cannot reward employees who do not turn up to work on time or miss work for no reason every Monday, the same way we reward the ones who are devoted to their work and have been productive. There will be discontentment about this of course, but we want to ensure fairness and improve productivity.

SNA: Finally, after the experience of being the president for one year now, will you be looking for a second term come the next elections in four years?

WR: This first year has really brought a lot of encouragement that things are heading in the right direction. But rather than thinking about a second term, I want to see that in five years, Seychelles makes a lot of progress.

I wish that after five years Seychelles is ranked first in most of the indices concerning development. I want our education levels to go up; our health system to improve to give people greater confidence in its services and to also promote more locally made products and exports, such as vanilla, cinnamon and turmeric.