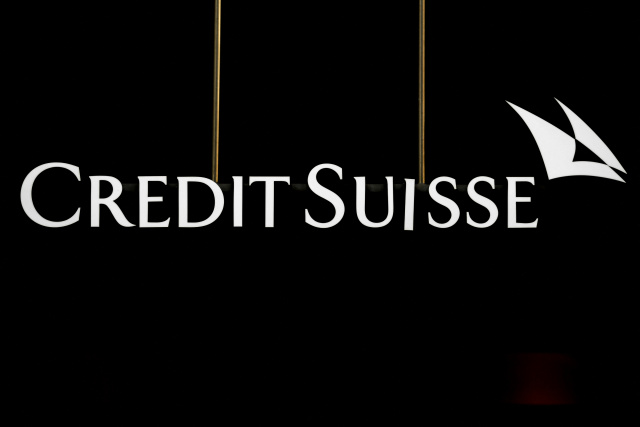 (FILES) This file photograph taken on October 17, 2017, shows the logo of Swiss banking giant Credit Suisse in Zurich. Credit Suisse has agreed to pay USD475 million to US and British authorities to resolve charges of "fraudulently misleading investors" and violating anticorruption law in the bond offerings in Mozambique, US officials announced October 19, 2021. (Fabrice COFFRINI / AFP)

(AFP) - Credit Suisse has agreed to pay $475 million to US and British authorities to resolve charges of "fraudulently misleading investors" and violating anticorruption law in the bond offerings in Mozambique, US officials announced Tuesday.

Mozambique's "hidden debt" scandal stemmed from loans in 2013 and 2014 to three public companies to finance a tuna fishing project, debt the government masked from the nation's parliament.

When details finally surfaced in 2016, donors such as the International Monetary Fund cut off financial aid, and the southern African country was plunged into a financial crisis, as it defaulted on debt payments and the currency collapsed.

The transactions "that raised over $1 billion were used to perpetrate a hidden debt scheme, pay kickbacks to now-indicted former Credit Suisse investment bankers along with their intermediaries, and bribe corrupt Mozambique government officials," the US Securities and Exchange Commission said in a statement.

In fact, bankers received at least $50 million in kickbacks, part of at least $200 million in total kickbacks to players in the scandal that included Mozambican government officials, the SEC order said.

The eldest son of Mozambique's ex-president Armando Guebuza is among 19 high-profile defendants facing trial in the capital Maputo, and one has admitted receiving bribes.

A unit of the big Swiss bank pleaded guilty to one count of conspiracy to commit wire fraud as part of a three-year deferred prosecution agreement between the parent company and with US criminal authorities, the US Justice Department said.

The company is paying a total of in $547 million in penalties, fines, and disgorgement as part of coordinated resolutions with US and British criminal and civil authorities, the statement said.

The financial giant recognized in a statement that it "failed to conduct its business with due skill, care and diligence," but said "has already taken decisive steps to strengthen its relevant governance and processes."

The SEC said bank officials also failed to disclose in investment documents the full extent of Mozambique's indebtedness and the risk of default.

Meanwhile, the Swiss Financial Market Supervisory Authority (FINMA) required the bank to use third-party verification of compliance for business conducted in financially weak and high-risk countries.

The latest settlement comes on the heels of two guilty pleas by former Credit Suisse bankers in 2019 to charges to commit money laundering and a guilty plea by a third banker for conspiracy to commit wire fraud.

And the bank was rocked by meltdowns at financial firms Greensill and Archegos earlier this year that cost Credit Suisse some $5.5 billion.

An independent external investigation into the Archegos fiasco found a failure to manage risk effectively at Switzerland's second biggest bank, and the company has named a new risk committee.

General » Be a reporter: Write and send your article » Subscribe for news alert
Tags: US, UK, Mozambique