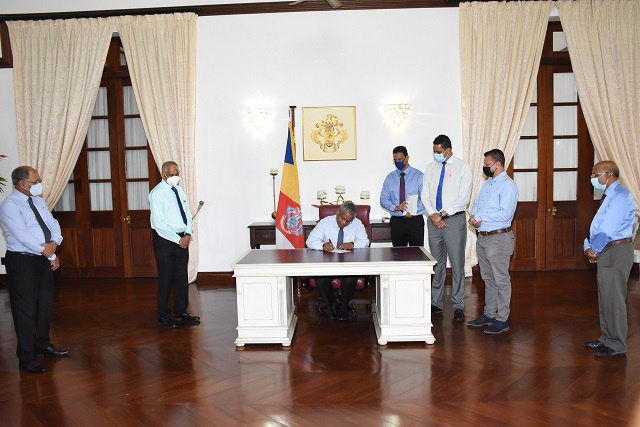 The President signed into law an amendment to the Penal Code to decriminalise defamation. (Seychelles Nation)

(Seychelles News Agency) - Defamation is no longer a crime in Seychelles after President Wavel Ramkalawan signed into law an amendment to the Penal Code.

Earlier this month, the National Assembly approved the repeal of Chapter 18 of the Penal Code which effectively decriminalises defamation. As of now, defamation can only be pursued as a civil case.

"I am very happy that we have come to this point in Seychelles and it has to do with our belief that journalism and that the media in general should be free to practise their trade," the President said after signing the Act on Tuesday.

Ramkalawan said that the decriminalisation of defamation reflects major strides in the right direction for Seychelles in the arena of freedom of expression and in providing the right landscape and space for journalists to practice their profession freely without fear of criminal prosecution.

The vice chairperson of the Association of Media Practitioners in Seychelles, Joanna Nicette, told SNA that "this is the first step in the right direction as there still remains some work to be done on the law so that it is completely in line with international best practices."

Seychelles, an archipelago in the Western Indian Ocean, has been working to modernise its laws in recent years.

The country with 99,000 inhabitants improved its ranking in the World Press Freedom Index, climbing 11 spots to 52nd out of 180 countries for 2020. The index is published by Reporters Without Borders (RWB), a Paris-based non-governmental organisation.

General » Be a reporter: Write and send your article » Subscribe for news alert
Tags: penal code, Association of Media Practitioners in Seychelles