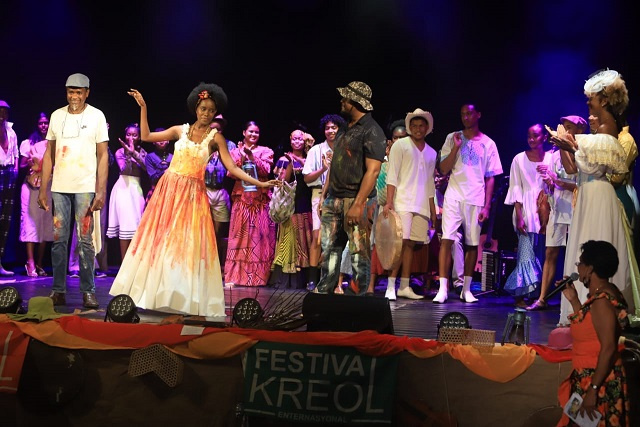 The 36th edition of the Creole Festival was officially opened at the National Theatre in the central district of Mont Fleuri on Thursday. (Joe Laurence, Seychelles News Agency)

(Seychelles News Agency) - Celebrating the Creole Festival in Seychelles every year says a lot about the perseverance and determination of a nation that is proud of its identity, said a top official at the opening of the annual event on Thursday.

A poem from Helda Marie which traced the birth of the Seychellois nation kicked off the 36th edition of the Creole Festival at the National Theatre in the central district of Mont Fleuri.

This year's edition was officially opened by the Mayor of Victoria, David Andre, who said that 'this year it is with great pride that we celebrate the 36th edition of the Creole Festival, the oldest cultural demonstration that has retain its place since its creation."

Andre said that this says a lot about the perseverance and determination of a nation proud of its identity which is why the event remains an important one on the Seychelles' cultural calendar.

"There have been many successes and many challenges throughout the years. I take this opportunity to thank all those before us who have been behind the success of this event until today. Your contribution is priceless and had an importance on the preservation of our cultural identity as a Creole nation," he added.

The Mayor of Victoria said that "the Creole festival is the showcase of our Creole culture where our Creole people demonstrate the different aspects of our society through how we live, our know-how, our values, our language, our arts, and our heritage."

With restrictions still in place amid the COVID-19 pandemic, in this year's festival there are no events for large gatherings like musical shows, a carnival called 'La Serenad' and Creole Sunday on the beach.

"Today in this new normal it is clear that we cannot hold big gatherings but this should not become an obstacle to celebrate our culture and our identity. This year the Creole Festival committee has put its efforts on what we can do and not worry about what we can't do," said Andre.

The mayor of Victoria said that it is important at this point in time "to make some reflection on our nation and together let us take a look at our future as a people which is not being spared by the impact of globalisation, geopolitical wars, climate change, technology, social media among others."

He concluded by saying that "our culture is a treasure that we have inherited, that has brought joy, pride and the unique identity that makes us who we are. It is our mission to pass the gift on to our children so they can also enjoy this cultural richness and reinforce their sense of belonging."

The address was followed by the theme song of the Creole Festival 'La sezon kreol' (the Creole season) by well known veteran artist Joe Samy.

For an hour, top government officials and invited guests were able to enjoy traditional Creole songs, dances and modelling by both young and old.

Several activities are on the Creole Festival programme until October 30.