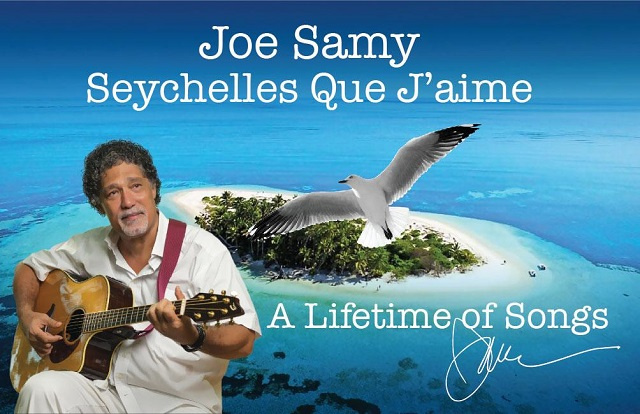 Coinciding with the 36th edition of the Seychelles Creole Festival, Samy has released a new album entitled "A Lifetime of Songs. (Joe Samy)

(Seychelles News Agency) - Fans of well-known Seychellois artist Joe Samy and more generally lovers of Seychellois music have a new album to add to their collection.

Coinciding with the 36th edition of the Seychelles Creole Festival, Samy has released a new album entitled "A Lifetime of Songs."

Samy told SNA that the album, which consists of 55 songs, is the culmination of the work he has done during his 50 years in the music industry.

"Since one of the songs on the album is 'Lasezon Kreol ' -- the unofficial anthem of the Creole Festival -- I thought it would be good to release it during this time," said Samy.

This year's Creole Festival was launched on Wednesday at the National Theatre on Mahe, the main island, an event that Samy said "shows how we are a nation that uses three languages fluently and we showcase the various cultures that have meshed together to make us what we are."

Samy, popular in Seychelles not only as a broadcaster but also for the many songs he has released over the years, told SNA that while this album is a labour of love, it took him some time to choose songs to include.

"The challenge I faced in making this compilation is that over the years I have not so much as written many songs, but I have rather re-worked the ones I already had," he said.

As a sign of the times, the album is available on flash drive only as "it would have been really hard to put all the songs on one CD," he added.

Most of the songs featured on the album have been re-worked, with the exception of the well known "Lasezon Kreol" which he claimed he did not want to touch as people already love it and are used to it the way it is.

As a bonus, Samy has added seven instrumentals on the album that fans can use for karaoke.