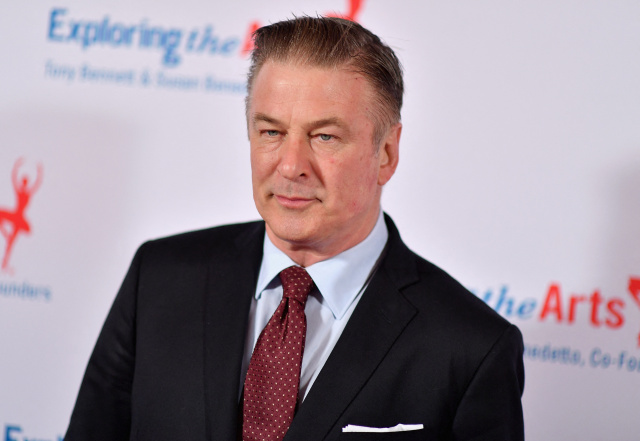 (FILES) In this file photo taken on April 12, 2019 actor Alec Baldwin attends the 'Exploring the Arts' 20th anniversary Gala at Hammerstein Ballroom in New York City. US actor Alec Baldwin fired a prop gun that killed a cinematographer and wounded the director on a film set in New Mexico, US law enforcement officers said October 21, 2021.
The incident happened on the set of "Rust" in the southwestern US state, where Baldwin is playing the lead in a 19th-century western. No charges have been filed over the incident, which is being investigated. (Angela Weiss / AFP)

(AFP) - The police investigation into a fatal shooting with a prop gun fired by actor Alec Baldwin on a film set was focusing Saturday on the specialist in charge of the weapon and the assistant director who handed it to Baldwin.

Ukraine-born cinematographer Halyna Hutchins, 42, was struck in the chest and died shortly after the incident Thursday in New Mexico, while director Joel Souza, 48, who was crouching behind her as they lined up a shot, was wounded and hospitalized, then released.

Police interviewed a visibly distraught Baldwin, who willingly cooperated. They have pressed no charges.

Souza said in a statement Saturday that he was "gutted" by the loss of his friend and colleague. "She was kind, vibrant, incredibly talented, fought for every inch, and always pushed me to be better," he told Deadline, an entertainment news outlet.

The incident sparked intense speculation on social media about how such an accident could have occurred despite detailed and long-established gun-safety protocols for film sets.

The incident came only hours after a walk-out by film crew members concerned about working conditions, according to the Times. Among their complaints were two or three accidental prop-gun discharges.

According to the paper, one camera operator had messaged a production manager, saying, "We've now had 3 accidental discharges. This is super unsafe."

Rust Movie Productions said in a statement that it had not been made aware of any "official complaints" but would "continue to cooperate with the Santa Fe authorities" while also conducting its own review.

Some details emerged in an affidavit submitted by the Santa Fe County sheriff's office to obtain a search warrant. The affidavit was viewed by AFP.

It said Assistant Director Dave Halls, the Hollywood veteran who handed the gun to Baldwin during a rehearsal, called out "cold gun" as he did so -- industry code for a weapon with no live ammunition.

"The Assistant Director (Dave Halls) did not know live rounds were in the prop-gun," the affidavit said.

It said police wanted to determine whether any video footage or cell phone images from the set would shed light on the incident; to check the "Western style" outfit worn by Baldwin, which bore apparent blood stains; and to examine all firearms, ammunition and casings on the scene.

The affidavit stated that Baldwin handed the gun to 24-year-old Hannah Gutierrez-Reed -- the movie's weapons master, or armorer -- immediately after the shooting, and that she removed a spent casing and handed it, and the gun, to deputies when they arrived.

The affidavit did not specify what type of charge the gun might have carried.

A 911 call to police immediately afterward conveyed the shock and anger felt on the set.

"We've had two people accidentally shot by a prop gun, we need help immediately," the caller tells a police dispatcher.

"Was it loaded with a real bullet?" the dispatcher asks.

"I don't -- I can't tell you that," the caller replies. "And this (expletive) AD ... this mother (expletive) –- he's supposed to check the guns, he's responsible for what happens on the set."

Gun safety guidelines from the Actors' Equity Association specify that "all loading of firearms must be done by the property master, armorer or experienced persons working under their direct supervision."

The guidelines also state: "Before each use, make sure the gun has been test-fired off stage and then ask to test fire it yourself. Watch the prop master check the cylinders and barrel to be sure no foreign object or dummy bullet has become lodged inside."

Baldwin, one of Hollywood's best-known actors, said he was heartbroken and was cooperating fully with the inquiry.

Gutierrez-Reed is the daughter of longtime film-industry armorer Thell Reed. In a September podcast, she said she had some trepidation about her first stint as a lead armorer during the recent filming of "The Old Way," another Western.

"I almost didn't take the job 'cause I wasn't sure if I was ready," she said on the "Voices of the West" podcast. Loading blanks, she added, made her particularly nervous.

Halls and Gutierrez-Reed could not be reached for comment.

District Attorney Mary Carmack-Altwies said in a statement Friday that the case is in its preliminary stages, adding, "At this time, we do not know if charges will be filed."

"Rust" was being filmed on sprawling Bonanza Creek Ranch, the setting for scores of movies over several decades.

Baldwin stars as Harland Rust, an outlaw who goes on the run with his grandson after the latter is convicted of murder following an accidental killing.

General » Be a reporter: Write and send your article » Subscribe for news alert
Tags: Entertainment, US, movie