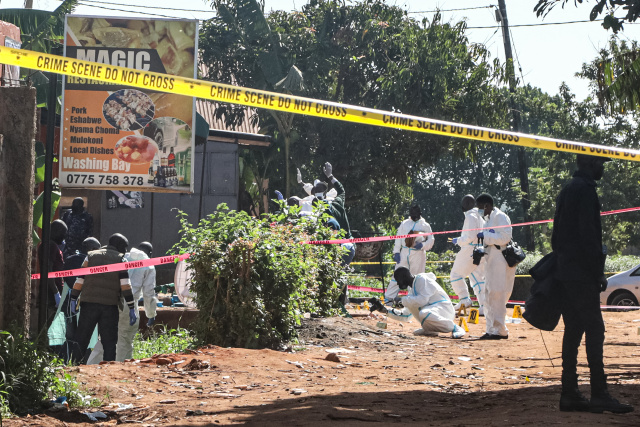 Ugandan police officers investigate at a crime scene following a bomblast last night in Kampala on October 24, 2021. Ugandan President Yoweri Museveni said on October 24, 2021, that an explosion in the capital Kampala that killed one person and injured five was "a terrorist act" and vowed to hunt down those responsible. Police said a "serious blast" occurred at around 9 pm (1800 GMT) on October 23, at a grilled pork joint in Komamboga, a northern Kampala suburb popular with roadside diners. (Badru KATUMBA / AFP)

(AFP) - Ugandan police said Sunday that a deadly explosion that killed one person and injured three others at a roadside eatery in the capital Kampala was an "act of domestic terror".

Police spokesman Fred Enanga said the attackers arrived at the popular grilled pork joint in northern Kampala at around 8:30 pm (1730 GMT) on Saturday carrying a plastic shopping bag that they placed under a table.

Shortly after leaving thirty minutes later, an explosion ripped through the eatery.

"The suspects detonated the device after they left the scene," Enanga told reporters, describing the explosive as "crude" and containing nails and metal fragments.

"All indications suggest an act of domestic terror."

President Yoweri Museveni earlier said the blast "seems to be a terrorist act" and vowed to hunt down those responsible.

"The public should not fear, we shall defeat this criminality like we have defeated all the other criminality committed by the pigs who don't respect life," he said.

Enanga said the group appeared unsophisticated and investigators believed they could track their whereabouts using evidence found at the scene.

They did not elaborate on the identity or motivation of the suspected attackers.

Police said the blast killed 20-year-old Emily Nyinaneza, a waitress. Three others were in hospital, including two in a critical condition.

The explosion occurred about two hours after the start of a nationwide dusk-to-dawn coronavirus curfew.

Local mayor Emmanuel Sserunjogi said the bombing took place in an area popular with young revellers looking for roasted meat and drinks on a night out.

"The community are frightened. It was such a terrible act. People were woken up by the sound of the bomb," he told AFP.

It is the first such deadly attack in many years in Kampala, a bustling city of two million on the shores of Lake Victoria.

But it followed an uptick in recent weeks of signs and warnings that a strike could be imminent.

On October 8, the Islamic State group claimed its first attack in Uganda, an alleged bombing of a police post in the Kawempe area, near where Saturday's explosion occurred.

In a statement issued through its communication channels, the group claimed a unit from its Central Africa operation had detonated an improvised explosive device that resulted in injuries and damage to police infrastructure.

No explosion or any injuries were reported by authorities or local media at the time, though police later confirmed a minor incident had occurred without providing further details.

However in the following days, both the UK and France updated their travel advice for Uganda, urging vigilance in crowded areas and public places like restaurants, bars and hotels.

"Terrorists are very likely to try to carry out attacks in Uganda. Attacks could be indiscriminate, including in places visited by foreigners," stated the updated advice from the UK.

But police were adamant Saturday's attack had no foreign agenda.

Somalia's Al-Shabaab militant group claimed responsibility for the blasts at a restaurant and at a rugby club.

The attack, the first outside Somalia by the insurgents, was seen as revenge for Uganda sending troops to the war-torn country as part of an African Union mission to confront Al-Shabaab.

Africa » Be a reporter: Write and send your article » Subscribe for news alert
Tags: Uganda, explosion