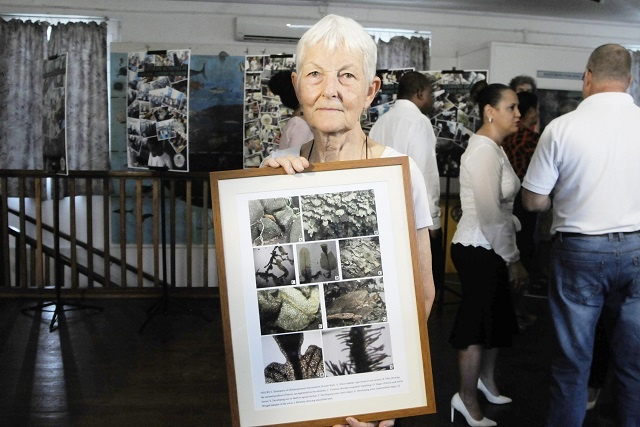 Beaver was honoured in 2017 when a fern was named after her. (Seychelles Nation)

(Seychelles News Agency) - The namesake of Katy's Fern, an ardent and fierce protector of Seychelles' green environment, is remembered for her 40 years of conservation work on the islands.

Katy Beaver, who was born in the United Kingdom but made the islands her home, passed away last week following an illness. She is survived by her husband, well-known local environmentalist Lyndsay Chong Seng, two daughters as well as her siblings in the United Kingdom.

Beaver was a founder of the Plant Conservation Action Group and as a conservationist was involved in many types of research and studies. She was also a writer and illustrator.

Jeanne Mortimer said she and Beaver collaborated on many projects. The latest is a series of studies on Seychelles' seagrass. Mortimer told SNA on Sunday that Beaver came to the island nation in 1982, one year after she – Mortimer - had arrived.

"Katy came from Keele, Staffordshire in the UK where she was born and grew up. Her father was a geographer and this is where she got exposed to the environment. When she came to Seychelles she was studying worms, but then diverted to studying insects. Her brother is an entomologist in Thailand," recounted Mortimer.

Beaver, according to Mortimer, before coming to the 115 islands archipelago in the western Indian Ocean, had worked in Rwanda and the Pacific islands of Samoa and Fiji.

Mortimer added that Beaver took her role as conservationist very seriously and even took to walking rather than driving in a bid to reduce pollution and did all she could to reduce her carbon footprint.

Naturalist Pat Matyot recalled how he met her in the 1980s and accompanied her on a group hike. "I distinctly remember overhearing Katy scolding another member of the group for having uprooted a fern. 'This is a nature reserve,' she said. 'You are not supposed to remove anything from here.' Over the years I realised that she was very disciplined about such things," recounted Matyot.

According to Matyot what stood out with Beaver was that she had principles and stood by them. "You could say that she had a 'progressive' outlook - she was an ardent conservationist with a strong social conscience. She not only had a passion for natural history and nature conservation but was also concerned about doing the right things for the natural environment and society generally. You know, things like the three R's – reduce, reuse and recycle – to cut down on the amount of waste we produce."

Matyot added that Beaver was also very protective of genetic resources. "She did not like the idea of outsiders coming to Seychelles and collecting specimens of endemic plants and animals in an uncontrolled manner, in case the collected species proved to be sources of genetic material that could be used in breeding or genetic engineering projects that would benefit others and not Seychelles."

Charles Morel - the curator of the Seychelles National Herbarium, is another person who has worked closely with Beaver over the years. "She would often come by, bringing with her bits of plants which she had collected in the field, to identify them. This was the beginning of what was to be a lasting friendship," explained Morel.

Morel added the projects that he and Beaver worked on included the upgrade of the National Herbarium, the monitoring of the Bryophytes on dying Sandragon trees and the setting up of a permanent exhibition in the Doctor's House, Curieuse island – a terrestrial and marine park.

"Katy's impact is arguably beyond compare, and yet it remains rarely spoken of. She remains a pioneer who was instrumental in bringing issues relating to the environment to national attention and creating awareness of the Seychelles biodiversity, nationally and internationally. A teacher, nature lover, environmentalist, mother, wife and a true friend is gone," concluded Morel.

Beaver was honoured in 2017 when a fern was named after her. "Fouzer Kati" (Katy's fern in English) was in honour of her extensive contribution toward the study of plants in Seychelles, popularising scientific research and developing educational material for children and young researchers.

She had told reporters back then, "It is a great honour to have a Latin name given to a plant after yourself. Something that pleases me is that it is a very small fern, almost microscopic. That suits my nature quite well," said Beaver, who was herself small in stature.