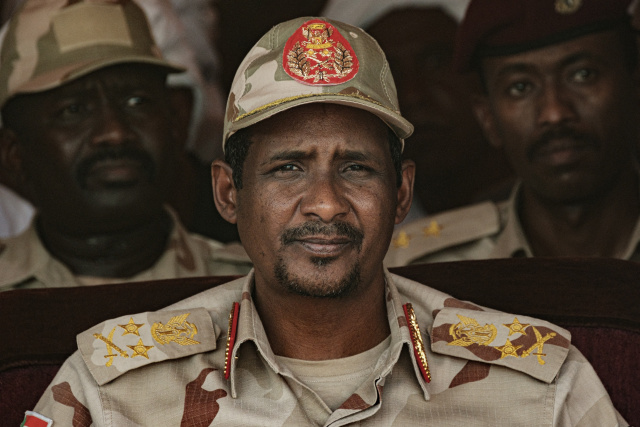 (FILES) In this file photo taken on June 22, 2019, Mohamed Hamdan Dagalo, known as Himediti, deputy head of Sudan's ruling Transitional Military Council (TMC) and commander of the Rapid Support Forces (RSF) paramilitaries, attends a rally in the village of Abraq, about 60 kilometers northwest of Khartoum. Unidentified armed men arrested a number of Sudanese leaders early Monday, a government source told AFP, after weeks of tensions between the military and civilian transitional authorities. The internet was cut across the country, AFP journalists said, as demonstrators gathered on the streets to protest the arrests, setting fire to tyres. (Yasuyoshi CHIBA / AFP)

(AFP) - Angry Sudanese stood their ground Tuesday in street protests against a coup, as international condemnation of the military's takeover poured in ahead of a UN Security Council meeting.

"No to military rule", "The revolution will go on" and "Returning to the past is not an option", they chanted, a day after the armed forces seized power and reportedly shot dead at least four people.

On Monday soldiers detained Prime Minister Abdalla Hamdok, his ministers and civilian members of Sudan's ruling council, who have been heading a transition to full civilian rule following the 2019 overthrow of autocrat Omar al-Bashir.

The subsequent declaration of a state of emergency and dissolution of the government provoked an immediate international backlash with the United States, a key backer of Sudan's transition, strongly condemning the military's actions and suspending millions of dollars in aid.

The UN demanded Hamdok's "immediate release", while diplomats in New York told AFP the Security Council was expected to meet to discuss the crisis on Tuesday.

Announcing the state of emergency, Sudan's top general Abdel Fattah al-Burhan said the army had taken the actions it had "to rectify the revolution's course".

Meanwhile, Sudan's ambassadors to Belgium, France and Switzerland announced their defection on Tuesday.

They condemned the coup and declared their diplomatic missions as "embassies of the Sudanese people and their revolution", according to the information ministry.

Despite the previous day's deadly violence, protesters remained on the streets of Khartoum overnight and into Tuesday.

Shops around the capital were shuttered following calls for a campaign of civil disobedience.

"We will only leave when the civilian government is restored," said 32-year-old demonstrator Hisham al-Amin.

Clashes erupted in Khartoum after Burhan's speech on Monday.

Internet services were cut across the country and roads into Khartoum were shut, before soldiers stormed the state broadcaster in the capital's twin city of Omdurman.

At least four demonstrators were killed and about 80 wounded, said the independent Central Committee of Sudan Doctors.

US Secretary of State Antony Blinken expressed concern over the reported use of live ammunition against protesters.

The United States has suspended $700 million in aid.

A troika of countries previously involved in mediating Sudanese conflicts -- the US, UK and Norway -- said "the actions of the military represent a betrayal of the revolution, the transition, and the legitimate requests of the Sudanese people for peace, justice and economic development".

UN Secretary-General Antonio Guterres said the detention of the civilian leaders was "unlawful" and condemned "the ongoing military coup d'etat".

Bashir, who ruled Sudan with an iron fist for three decades, is in jail in Khartoum following a corruption conviction.

He is wanted by the International Criminal Court on charges of genocide over the civil war in Darfur.

A 2019 power-sharing deal after his fall saw Sudan ruled by a Sovereign Council of civilian and military representatives tasked with overseeing a transition to a full civilian government.

Jonas Horner from the International Crisis Group think tank called the coup an "existential moment for both sides".

"This kind of intervention... really puts autocracy back on the menu," he said.

In recent weeks, the cracks in the leadership had grown wide.

Hamdok had previously described splits in the transitional government as the "worst and most dangerous crisis" facing the transition.

In recent days, two factions of the movement that spearheaded demonstrations against Bashir have protested on opposite sides of the debate -- one group calling for military rule, the other for a full handover of power.

Tensions have long simmered within the movement, known as Forces for Freedom and Change, but divisions ratcheted up after what the government said was a failed coup on September 21 this year.

One FFC leader warned of a "creeping coup" at the weekend during a news conference in Khartoum that was attacked by a mob.

The mainstream FFC appealed on Monday for a nationwide campaign of "civil disobedience".

Africa » Be a reporter: Write and send your article » Subscribe for news alert
Tags: Sudan, politics