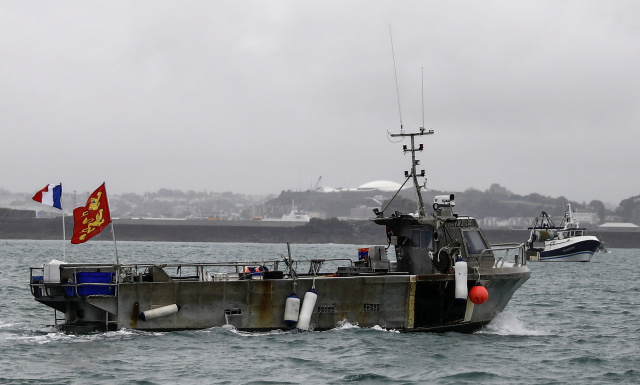 (AFP) - A smouldering row between London and Paris over post-Brexit fishing rights has flared up, with France threatening trade disruptions from next week if its boats are not granted more access to British waters.

The measures targeting British fish exports from November 2 would include "systematic customs and sanitary checks on products brought to France and a ban on landing seafood", French government spokesman Gabriel Attal told reporters on Wednesday.

Europe Minister Clement Beaune said extra checks could also be extended to "other merchandise" by "reinforcing our procedures and controls compared with current practices".

Tweeting in response to Beaune, London's Brexit minister David Frost posted a government statement that "France's threats are disappointing and disproportionate, and not what we would expect from a close ally and partner".

"The measures being threatened do not appear to be compatible with the (post-Brexit) Trade and Cooperation Agreement and wider international law," the statement continued.

It said London would meet any French moves with "an appropriate and calibrated response".

The latest spat between the neighbours was sparked by licensing rules for EU fishing boats wanting to operate in waters around Britain and the Channel Islands after Brexit.

France has been incensed by the rejection of French boats by Britain and the self-governing Channel Islands of Jersey and Guernsey, which depend on London for defence and foreign affairs.

While targeted measures for the fishing sector would hurt British exports, broader customs checks have the potential to seriously slow down trade with the UK.

Later on Wednesday, French maritime police fined two British fishing vessels operating in the Bay of Seine, one of which was operating without a licence.

The French maritime minister said on Twitter that the checks on the British boats were standard during the scallop-fishing season.

But she said they had been launched against "the backdrop of the tightening of controls in the Channel, in the context of discussions on licenses with the United Kingdom and the European Commission".

The British fishing industry, which exports most of its produce to the EU, is highly dependent on French ports as a gateway to the Continent.

Attal said Wednesday that France "will not let Britain wipe its shoes on the Brexit deal".

The flare-up over fishing is the latest in a series of disagreements that have plunged diplomatic relations to their lowest point in decades.

As well as tensions over migration, Paris was outraged in September after Britain helped broker a deal to supply Australia with US nuclear submarine technology, leading Canberra to scrap a mega-deal with France for conventional submarines.

France claims Britain and the Channel Islands have issued around 210 permanent licences for French boats to operate in their territorial waters, and that 240 have been rejected or await approval.

Attal claimed France was missing "almost 50 percent of the licences that we have a right to" under the deal on fishing agreed between Britain and the European Union in December last year.

Britain denies discriminating against French fishermen and says that overall "98 percent of fishing licences have been granted" to EU boats.

This figure includes the roughly 1,700 licences issued to EU vessels to operate in more distant waters situated in the UK's exclusive economic zone, which extends 12-200 nautical miles from the coast.

But it is the licences for the coastal territorial waters that are the main source of tension.

In June, furious French fishermen sailed to the main port on Jersey to demonstrate, prompting Britain to send two naval patrol boats to the area.

Beaune said the sanctions against Britain could be ratcheted up over time.

"Either this first series of measures leads to a dialogue about the licences, then that's good," he told a hearing in the French Senate.

"Or these measures do not lead to the deal being implemented and we will take other measures, including on the supply of electricity for example," he added, echoing previous French threats to reduce electricity supplies to Jersey.

Under the post-Brexit deal, EU fishermen wishing to operate in UK waters had to prove they had fished in the area in previous years.

Rejected French fishermen say they are being unfairly restricted due to bureaucracy.

They say small boats lack GPS equipment required to prove their track record, while others complain that they are having difficulty obtaining licences for new vessels.

General » Be a reporter: Write and send your article » Subscribe for news alert
Tags: France, Britain