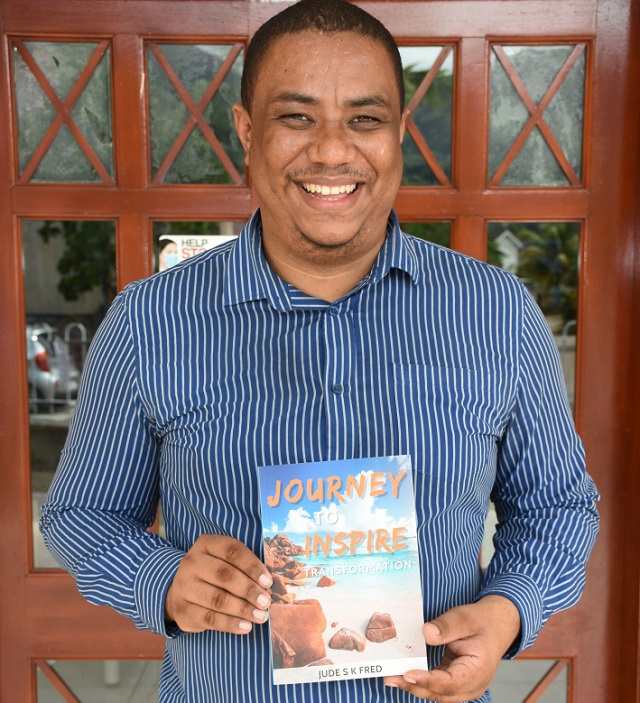 'Journey to Inspire Transformation' was launched last week at the community centre of Roche Caiman, in central Mahe. (Seychelles Nation)

(Seychelles News Agency) - The death of a family member who used heroin propelled Seychellois Jude Fred to write a book aimed at inspiring and influencing every person to discover his or her life.

'Journey to Inspire Transformation' was launched last week at the community centre of Roche Caiman, in central Mahe.

Fred said he wanted to make a difference after Seychelles recorded its first death related to heroin in 2008. The book covers his journey from 2010 to date.

"Through this book, you will understand what inspired and changed my life when on that fateful day in the Ste Anne church I learned of the passing of the first drug victim, who was also a family member," said Fred

Fred, who used recreational drugs, said this incident led him to question his purpose and role and thus started his journey to transformation.

"The question was, what was I doing? What role was I playing to make a change? We should always ask ourselves, what are we doing individually to change the status quo. The more we are silent, the more we will see crimes increase in our nation," added Fred.

The author who is also the founder of the locally-based 'Everlasting Love Ministry' established in 2010, felt it was important to talk about the island's drugs scourge and other social ills.

"This book is not about the Everlasting Love Ministry and it is not just spiritual but it looks at things in context, from the past to where we are today. So, whoever reads it will be enlightened and find their God-given purpose," he said.

The book's topics include the birth of Everlasting Love Ministry, which brings love and hope to those from dysfunctional families and affected by drugs, the challenges of living in a Small Island Developing States, the role of a father in a section called 'The Father's Heart', as well as that of the church, and testimonies of hope from people whose lives have also been transformed.

Fred has dedicated it to his mentor and evangelist, the late Sister Josephine Valentin, whom he described as a phenomenal woman of God.

"I have been inspired by her burden for the lost and for people who are suffering from various life issues," he said.

The book is a culmination of three years of preparation and research. Although Fred said he was further prompted in January 2019 to write the book following the passing of a member of his ministry, who was in drug rehabilitation treatment in South Africa, he was still not ready to put pen to paper.

He started writing the 168-page book in June this year for a three-month period.

The limited edition of 150 books is selling at SCR200 ($14) each in local book outlets but they will also be sold online at a future date.

The author also plans to publish another book next year that will focus on restoring passion to motivate people to do positive things for themselves and others.