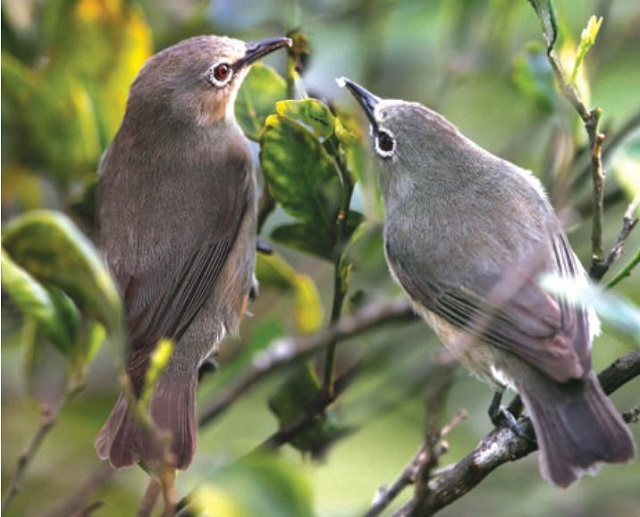 The Seychelles white-eye is classified as vulnerable on the IUCN red list. (Island Conservation Society)

(Seychelles News Agency) - The endemic Seychelles white-eye or zwazo linet in Creole might soon become extinct on the main island of Mahe and an attempt is being made to relocate them to another island, said a conservation biologist.

Gérard Rocamora, from the Island Biodiversity and Conservation centre of the University of Seychelles, told SNA that at the moment the population known on Mahe is about 10-12 birds.

Previously classified as Critically Endangered, on the IUCN red list, successful conservation work allowed the Seychelles white-eye -- a small grey bird with a narrow white ring around each eye --  to be downlisted to Vulnerable. The species can currently be found on Mahe, Fregate, North Island and Grande Soeur.

"We currently have only a one-year project funded by the Critical Ecosystem Partnership Fund that will be finishing soon, and the team is still trying to find more funds to continue its work to protect the species. The aim right now is to move some of the few birds left on Mahe to another island to ensure that the precious genes of the Mahe bird population, different from those of the birds present on the other islands, can be passed on and do not vanish forever," said Rocamora

He explained that a morphology and genetics study of the birds on Mahe and Conception showed that those on the main island were slightly larger, however, this did not mean that the two populations were different subspecies.

Rocamora and his team have been studying the Seychelles white-eye since 1995 when he arrived in Seychelles, an archipelago in the western Indian Ocean. He was sent by BirdLife International to set up a programme for the monitoring of endangered species with the local environment ministry. At the time, little was known about the Seychelles white eye.

"Thanks to a few Seychellois naturalists like Mr. Chong Seng and Roy Youpa, I was able to see a few Seychelles white-eye at Souvenir, La Misere. Then we did a survey and we found only 35 birds on Mahe and estimated a population of less than 50," said Rocamora.

In the late 1990s, the conservation biologist with other local partners started a mission to save the endemic species after  270 white-eyes were found on Conception Island. The Seychelles white-eye Recovery Programme was born.

Under this project, Rocamora and his team, which included staff from the ministry of environment such as Perley Constance and Roland Nolin, carried out more research to understand why the species was doing so well on Conception and not on Mahe.

Rocamora and his team found out that on Conception there were brown rats, a species that does not climb trees much, contrary to the black rats that were present on Mahe.

"This meant that the brown rats could not predate the white eye as well as the black rat. This explained why they were doing much better on Conception than on Mahe. We also found a lot of trees producing berries, much less than on Mahe, probably because for years there were not many white eyes to disseminate the seeds and de to the negative impact of so many invasive trees," he added.

Another part of the rescue mission was to find out if the Seychelles white-eye could be transferred to other islands to create alternative and new populations as has been done with some other endemic species.

The team wanted to go forth with a transfer to another island and went to Curieuse and Fregate to look at the vegetation, the richness in insects, and fruit-bearing trees.

Fregate was seen as the best option and between 2001 and 2003, 37 birds were transferred to the island. A further 25 birds were later transferred in 2007 to North Island. The same year the team eradicated the brown rats on Conception because there was evidence that the pest was still killing and eating the birds. After that, the number of birds on the island increased to more than 330.

Unfortunately, Black rats colonised the island of Conception Island in 2016 and in only three years they destroyed the whole population. “This illustrates the terrible destructive power of rats”

The last census done on Fregate in 2017 recorded 240 birds and on North Island in 2018 recorded 140 birds, indicating that the population had developed and flourished. Census work has been recently conducted by the IBC centre and these islands, and new population estimates will be produced soon.

Today, the world population of this species stands probably at more than 500 birds.

"Thank God, we did the right thing by creating these two new populations on Fregate and North Island. We should never leave a species in one single island, at the mercy of any catastrophic events such as invasion by rats, fire or disease” Rocamora said.

The challenge of the UniSey IBC team is now to save these last white-eyes surviving on Mahe and their precious genes. By mixing birds from the two original populations, they hope to recreate a ‘super white-eye’ that could survive on both Mahe and small satellite islands such as Anonyme, where rats were eradicated back in 2002 and that can be easily maintained rat free.