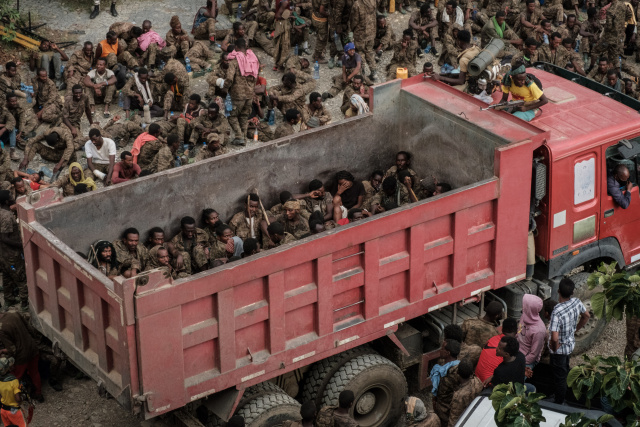 (FILES) In this file photo taken on July 02, 2021 Wounded captive Ethiopian soldiers arrive on a truck at the Mekele Rehabilitation Center in Mekele, the capital of Tigray region, Ethiopia. A year ago, as much of the world awaited the results of the US presidential election, Prime Minister Abiy Ahmed deployed troops in Ethiopia's Tigray region.
Although Abiy promised the military operations would be swift and targeted, they have instead devolved into a prolonged war marked by massacres, mass rapes and the looming threat of famine. (Yasuyoshi Chiba / AFP)

(AFP) - The UN rights chief on Wednesday slammed the extreme brutality characterising the conflict in Ethiopia's Tigray region, following a joint UN-Ethiopian report warning of possible "crimes against humanity" by all sides.

Michelle Bachelet insisted on the need to bring perpetrators of a vast array of rights abuses to justice.

"The Tigray conflict has been marked by extreme brutality," the UN High Commissioner for Human Rights said in a statement.

"The gravity and seriousness of the violations and abuses we have documented underscore the need to hold perpetrators accountable on all sides."

Her comments came after a joint investigation by her office and the Ethiopian Human Rights Commission (EHRC) into abuses committed by all sides since the Tigray conflict exploded a year ago.

Prime Minister Abiy Ahmed sent troops into the northern Tigray region on November 3 last year, to detain and disarm the Tigray People's Liberation Front, in response, he said, to the group's attacks on army camps.

The 2019 Nobel Peace laureate promised a swift victory, but by late June the rebels had regrouped and retaken most of Tigray.

And Wednesday's report came after Ethiopia declared a nationwide state of emergency and ordered residents of Addis Ababa to prepare to defend their neighbourhoods Tuesday amid fears Tigrayan rebels were heading for the capital.

The widely anticipated joint report, which covers the period from November 3, 2020 through June, when the Ethiopian government declared a unilateral ceasefire, found evidence of "serious abuses and violations" by all sides in the conflict.

It pointed to extra-judicial executions, torture and sexual violence among other abuses, and said there were "reasonable grounds to believe that a number of these violations may amount to crimes against humanity and war crimes".

"This report presents an opportunity for all parties to acknowledge responsibility and commit to concrete measures on accountability, redress for victims and the search for a sustainable solution to end the suffering of millions," EHRC head Daniel Bekele said in the joint statement.

The investigators said they faced significant security, operational and administrative challenges on the ground and were unable to carry out all planned visits in parts of Tigray.

The collaboration between the UN rights office and the government-created EHRC also raised concerns about the impartiality of the findings.

Those fears deepened after Ethiopia expelled seven UN officials last month, including one of the UN rights office's investigators.

Having "EHRC as a partner in the investigation is an affront to the notion of impartiality," the TPFL said in a statement before the release of the report.

The Ethiopian government however insisted its participation in the investigation proved its seriousness about addressing rights abuses.

"Only a government that's committed to the highest standard of transparency and integrity would subject itself to this kind of scrutiny," it said Tuesday.

The report, based on 269 interviews with victims and witnesses, described endemic torture, with victims beaten with electric cables and metal pipes, detained incommunicado and intentionally starved.

And it detailed how thousands of civilians had been forced to flee as a result of killings, rapes, destruction and looting of property, fears of reprisals and ethnic and identity-based attacks, particularly in western Tigray.

The report also highlighted abuses carried out by Eritrean troops, who have provided military support to the Ethiopian government forces, and who had forcefully returned Eritrean refugees in Tigray to Eritrea.

Sexual violence had also been rampant in the conflict, it found, detailing reports of gang rapes by various parties against women and girls, but also men and boys.

The investigators had for instance heard of one 16-year-old boy who was allegedly raped by nine Eritrean soldiers and who later committed suicide.

It also urged Eritrean authorities to immediately release all Eritrean refugees forcibly returned to the country.

And it stressed the need for the international community to step up and ensure that perpetrators are brought to justice.

It suggested the UN should consider creating an international investigation team tasked with gathering evidence for possible future criminal prosecution.

General » Be a reporter: Write and send your article » Subscribe for news alert
Tags: Ethiopia, UN