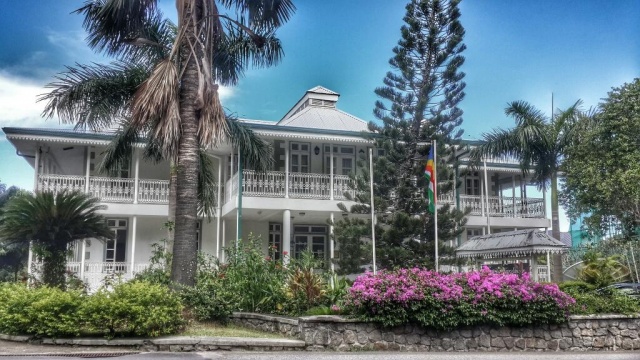 Maison Queau de Quinssy, Victoria. The seat of the Foreign Affairs Ministry which has today learnt that the death penalty imposed on three Seychellois nationals imprisoned in Egypt for drug traficking have been upheld. (Seychelles Ministry of Foreign Affairs)

(Seychelles News Agency) - The highest Court of Appeal in Egypt has upheld the death penalty imposed on three Seychellois nationals convicted of drug trafficking, the Seychelles Ministry of Foreign Affairs (MFA) says it has learnt today.

In a press statement issued this afternoon, MFA said the three men who are currently being detained in Egypt’s Qena prison have lost their appeal against the death sentence imposed on them last year.

Ronny Norman Jean, Yvon John Vinda and Dean Dominic Loze were sentenced to death by execution on April 7, 2013, the sentence was confirmed on June 3, 2013.

One of the families reached by SNA said they had already been informed of the Egyptian Court’s decision.

"We were informed of the Egyptian judiciary’s decision to maintain the death sentence by the Ministry of Foreign Affairs. We were told that the sentence would be applied in 3 weeks’ time," said Nola Loze in a phone interview with SNA.

Nola Loze is the mother of Dean Dominique Loze, one of three Seychellois convicted of drug trafficking.

"I am doing the necessary formalities to go to Egypt to see my son. As soon as the Ministry of Foreign Affairs has completed the procedures to obtain a visa and as soon as we get the necessary approval to go to the prison, I will be going to Egypt," she said.

Loze added that she did not think that the Egyptian judicial system would completely revoke the sentence imposed on the three men but she had hoped that maybe the court would not uphold the death penalty.

"Who knows maybe we will see God work miracles in the next three weeks,” she said.

Ever since the death sentence was imposed on the three Seychellois nationals, the Seychelles government had been appealing to the Egyptian government to commute their sentences to life imprisonment.

“Although it is the government’s policy to respect the sovereignty and judicial process in other countries, it nevertheless upholds the rights of its citizens to a fair trial. To this end, whilst reassuring the Egyptian authorities of its “zero tolerance” policy against drug trafficking, the Government wrote in 2013 to the Egyptian to appeal for a fair trial and the avoidance of capital punishment which does not exist in our legal system,” reads the MFA statement issued this afternoon.

“In the same vein, the Government took all measures practical and feasible to ensure that the Seychellois obtained the required legal and consular representation.”

The decision made known today implies that execution orders will now follow. However, the Ministry of Foreign Affairs did not specify if a date had been set for the sentence to be applied.

Executions are usually carried out by hanging in Egypt.

In spite of the recent development the archipelago’s Ministry of Foreign Affairs have made known the government’s intention to continue negotiating with the Egyptian authorities on the matter.

“…..the Government is not relenting in its efforts to pursue all possible diplomatic and legal avenues in consultation with the Egyptian authorities to avert the death penalty,” concludes the MFA statement.

The three Seychellois men were arrested on April 22, 2011 by the Egyptian police onboard a boat near the Red Sea coastal town of Marsa Alam. They were together with a British national identified as Charles Raymond Ferndale, who is said to be the owner of the vessel and another Pakistani national.

They were accused and charged for attempting to smuggle three tonnes of hashish, worth almost £3million, in 118 bags into Egypt.

It is believed that the drugs found in the South African flagged vessel originated from Pakistan.

All five men were sentenced to death, but the Pakistani national was said to have fled the scene and was sentenced in absentia.