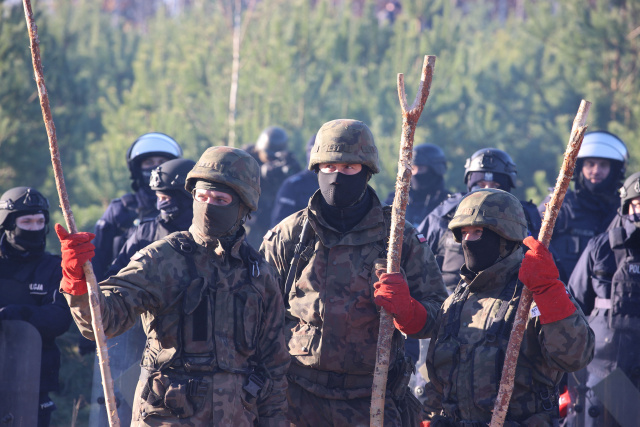 A picture taken on November 9, 2021 shows Poland's security personnel watching migrants gathered at the Belarusian-Polish border in the Grodno region, Belarus. Poland and Belarus squared off on November 9 over thousands of migrants aiming to enter EU member Poland, with Warsaw saying the wave threatened the security of the entire bloc. Minsk warned against "provocations" on the border, where armed troops from both countries are deployed amid escalating tensions. Trapped between the rhetoric are thousands of people, many escaping war and poverty in the Middle East, trying to survive outdoors in squalid conditions as temperatures dip toward freezing. (Leonid Shcheglov / BELTA / AFP)

(AFP) - Belarus on Wednesday accused Polish security forces of severely beating several migrants attempting to cross into the EU, as political rhetoric over a crisis on their shared border escalates.

Western critics have for months accused the Belarusian regime of luring migrants from the Middle East to Belarus to send them across the border to the European Union in retaliation for sanctions.

Hundreds of desperate migrants are trapped in freezing temperatures on the border and the presence of troops from both sides has raised fears of a confrontation.

The Belarusian border guard service said Wednesday in a statement that four ethnic Kurds had been beaten by Polish guards as they attempted to cross the border.

"According to the refugees, they were detained on the territory of Poland where they had tried to ask for protection and refugee status," the border service said.

Images published by the border guards showed a chain-link fence delineating the border, migrants sitting around fires and four men, some with bloody clothes and one with cuts on his hands, covering their faces.

"Judging by the numerous injuries on the bodies of the migrants, the Polish security forces mistreated the people and, using force, pushed them out behind a barbed-wire fence on the border with Belarus," the statement said.

It said the men had been given medical assistance.

Tensions between Brussels and Minsk have sharply risen since August last year when Belarusian strongman Alexander Lukashenko cracked down on anti-government protesters in the wake of elections the opposition said were rigged.

The EU imposed a range of sanctions over the crackdown and says it is considering new action over the migrant crisis.