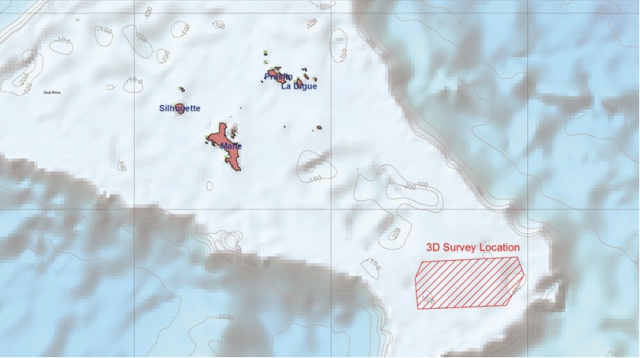 (Seychelles News Agency) - Australian oil company, WHL Energy, has described as “encouraging” preliminary data that has become available as a result of a 3D seismic survey carried out in its Seychelles offshore asset between June and July this year.

The seismic survey of an exploration block known as Junon, 115 kilometres southeast of the main Seychelles island of Mahé was undertaken by its partner FTSE-listed Ophir Energy.

Dolphin Geophysical, a Norwegian service company won the contract for the survey which was conducted by their 3D vessel, the Polar Duchess.

Ophir Energy which is involved in oil and gas exploration in East and West Africa with interests in countries including Ghana, Gabon, Somaliland and Kenya, signed a farm-in deal with Australian oil company WHL in March.

Under the agreement Ophir stands to earn a 75 percent stake in WHL's offshore Seychelles assets in return for an investment of up to $17.0 million on exploration, including the conducting of some 1500 km² of 3D seismic surveying.

In a press statement issued today, WHL Energy says an initial review of the “fast-track” data volume from the Junon 3D seismic survey that it has received is encouraging “in that the key prospects identified on the previous 2D seismic data can be interpreted on the fast track volume.”

The data now needs to be fully processed and WHL has indicated that an initial interpretation should be available by December this year.

“It is pleasing to see the progress with the investigation of the high potential Seychelles project continue utilising the latest technology available,” said David Rowbottam, the Managing Director of WHL Energy, in the press statement.

“While this initial seismic volume of the Junon 3D seismic data is very early stage with a lot of state-of-the art processing and interpretation yet to be undertaken, it is encouraging that the key geological features noted in the earlier 2D seismic can be interpreted on the fast track 3D seismic volume.”

The state owned company responsible for regulating the hydrocarbon sector of the Indian Ocean archipelago, PetroSeychelles, told SNA that they will have access to the “fast track” data shortly.

“It is encouraging news. PetroSeychelles will nevertheless undertake its own interpretation of the preliminary data that has become available while we wait for the data to be fully processed and get the final interpretation,” the Chief Executive Officer of PetroSeychelles Eddie Belle told SNA.

Once fully interpreted that data is expected to give the investors a better indication of whether drilling should commence around the surveyed areas and where it should take place.

Since the beginning of this year oil exploration in the Seychelles waters has been attracting more interest with several foreign companies currently involved in collecting seismic data.

Apart from the joint venture between Ophir Energy and WHL Energy, the state-owned company responsible for regulating the hydrocarbon sector of the Indian Ocean archipelago, PetroSeychelles, and Japan Oil Gas Minerals Exploration Company (JOGMEC) also conducted a two-week geochemical survey in the waters south-west of the main Seychelles island of Mahé in May.

The CEO of PetroSeychelles, Eddy Belle, also indicated that the country’s other exploration license holder, AFREN, will also be conducting an additional survey within the Seychelles’ EEZ early next year.

As foreign companies continue prospecting for oil and gas in Seychelles waters', the archipelago has also recently been accepted as a candidate country by the Norway-based Extractive Industries Transparency Initiative (EITI) board.

EITI sets the global transparency standard for all minerals and Seychelles joins 45 other countries worldwide, that are required to extensively disclose revenues and measures to improve accountability in exploitation of oil, gas and minerals.