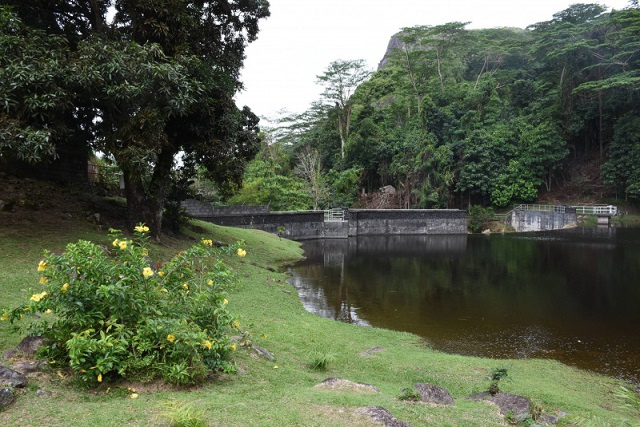 At the moment, the Rochon dam, which is the second largest in the country, is at 65 percent capacity. (Seychelles Nation)

(Seychelles News Agency) - A delay in the rainy season in Seychelles has forced the Public Utilities Corporation to increase restrictions on treated water on the main island of Mahe.

Water restrictions are uncommon in Seychelles from November to April, as the country's rainy seasons usually kick in.

The chief executive of the Seychelles Meteorological Authority, Vincent Amelie, told SNA on Wednesday that "for our seasonal forecast, we had expected that there would be a delay in our rainy season, due to the effect of the La Nina phenomenon."

La Nina is a phenomenon that causes the water temperature to be lower than normal, thus reducing the number of rain clouds produced, which means a lack of rainfall.

Amelie said that when the rain comes, it might be all at once and will possibly cause flooding.

"We expect that despite the delay in our rainy season, we will have the normal amount of rain during our rainy season and a lot of it could come around December to January, where there might be heavy rainfall across the country," he added

Since November 8, PUC has increased its treated water restrictions. Treated water will be available only 12 hours per day. Restrictions on tap water were put in place in August in most areas on the main island of Mahe from 10 pm to 4 am.

In a news report on SBC television, the general manager for the water division at PUC, Ibrahima Diallo, said restrictions have increased to another six hours during the day from 10 am to 4 pm.

"We must allow our reservoirs to replenish and at the moment, the only way to do that is to impose the restrictions at certain times and only give the public water during peak hours, which is before they go to work and when they get home," said  Diallo.

He said that at the moment, the Rochon dam, which is the second largest in the country, is at 65 percent capacity. La Gogue dam, the largest one in the archipelago in the western Indian Ocean, is still under expansion works.

Work to expand the capacity of the La Gogue dam by 600,000 cubic metres started in January 2018 and is expected to be completed in late 2022.

Meanwhile, PUC is using its desalination plants at Anse Boileau, in the northern district of Belombre, and at the new manmade island of Perseverance in the northeast to currently produce 58 percent of the water in use.