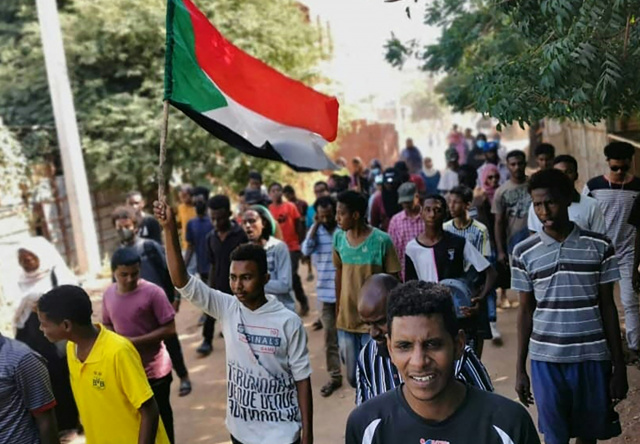 Sudanese youths protest in the streets of the capital Khartoum, amid ongoing demonstrations against a military takeover that has sparked widespread international condemnation, on November 4, 2021. (AFP)

(AFP) - The United Nations sees developments in Sudan, where a new transitional council has been named, as "very concerning," a spokesman said Thursday, as the UN envoy in the country told diplomats time was running out to find a peaceful resolution to the crisis.

Burhan named a new transitional council on Thursday, excluding representatives of the main bloc demanding a transfer to civilian rule.

"We are obviously taking a look at these developments. They are very concerning. We want to see a return to the transition as quickly as possible," UN spokesman Stephane Dujarric told reporters.

"We want to see the release of Prime Minister Hamdok as well as all other politicians and leaders who have been detained."

The UN Security Council met behind closed doors on Sudan on Thursday -- a previously scheduled meeting.

The Council did not issue a joint statement and Britain, which called for the meeting, did not even seek to secure one, given Russia's support for Burhan, diplomats said.

Moscow believes Burhan is needed to maintain stability, its envoy told the meeting, one diplomat said on condition of anonymity.

"We remain gravely concerned by reports of further unilateral action by the military, which is against the spirit and the letter of the constitutional declaration," Britain's envoy to the United Nations, Barbara Woodward, told reporters after the meeting.

During the meeting, the UN's special envoy for Sudan, Volker Perthes, was "very frank in his assessment that the window now is closing for dialogue and for peaceful resolution," Woodward said.