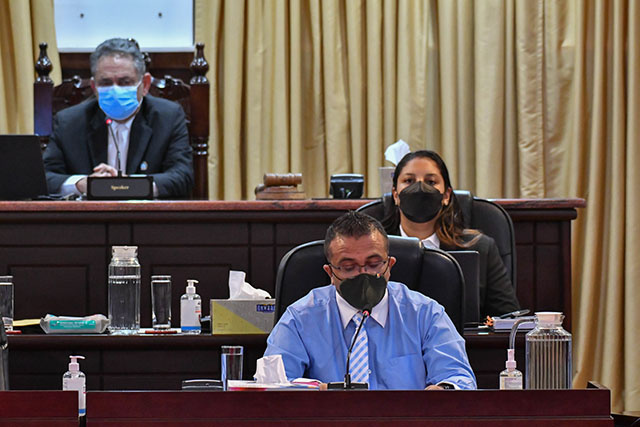 (Seychelles News Agency) - A proposed 2022 budget of just over SCR10 billion ($773 million) was presented to the National Assembly for approval on Friday with the health and education ministries receiving 32 percent of the allocation for goods and services.

In his budget address, Naadir Hassan, Minister for Finance, Economic Planning and Trade, said that the Ministry of Health will continue to receive an important part of the budget.

"The COVID-19 pandemic has shown us that when we talk about health, we have to first talk about prevention and human capacity development. Prevention is always better than cure," said Hassan.

The minister said that "the government recognises the fact that education is one of its priority sectors, and resources are being put at its disposition to help it accomplish its plans." A total of SCR 1.03 billion ($79 million) has been allocated for 2022.

Hassan outlined that the principal objective of the 2022 budget is to continue to make government debt become more sustainable and along that line a series of reviews will be done.

"It is the government's priority to bring about a surplus in our budget, which will allow us to increase salaries, especially for those in the lower income brackets. The government is working on a new salary structure for the public service, and we expect to apply this new framework in the 2023 budget," said the minister.

He added that "our priority is to consolidate government expenses and to make the public services more efficient. We will also continue to work with the Seychelles Revenue Commission to modernise the system they are using and make revenue collection become more efficient."

Hassan said that there will be a review in the second schedule in the Income and Non-Monetary Benefits tax act, to bring more transparency to those salaries that are not taxed.

"In the medium term, we will work on a tax system on salaries that will include deductions of employees' expenses. We shall be able to implement this once we have completed the implementation of the Revenue Commission's tax system," he said.

Hassan also spoke on the sustainability of the Seychelles Pension Fund and Retirement Benefit.

"One of the first measures that Pension Fund has recommended is to increase the retirement age, from 63 to 65. This will take effect in 2023. At the same time, Pension Fund is working on different options which would allow retirement at the age of 60, but the retiree will only get a portion of the retirement pension, up until he/she turns 65," he said.

The public service restructuring will continue in 2022 and this will include a review of the role, mandate and structure of the Public Administration Department. A Public Sector Commission will be set up to appoint senior executives in the public sector to ensure there is better transparency in the appointments and no mediocrity.

Discussions are ongoing on how to revise the framework which is expected to come into force by April 1 next year.

The Minister said that economic transformation will continue some of the important sectors in the economy of Seychelles, an archipelago in the western Indian Ocean.

The focus on the tourism sector, which is the highest contributor to the economy, to make it more resilient and improve the products being offered, promote policy diversification and to better inculcate the nation's Creole identity in what is offered.

The transformation in agricultural sector will focus on the food production system to build a more competitive and productive system.

Hassan said that the fisheries sector, the second top economic contributor, is a key sector with much potential.

"Our fish consumption per capita is one of the highest in the world, and this shows that fish plays a very important role in the nutrition of our population. The principal source of our consumption is artisanal fishermen. To show their importance, we are joining with the United Nations General Assembly to celebrate 2022 as the international year of artisanal fishing and aquaculture," said Hassan.

On the digital economy, the minister said that the Department of Information and Communication Technology (DICT) is working on two initiatives with the principal aim of reducing the cost of internet services in the country.

"The first initiative is a collaboration with the Central Bank to conduct a study on the affordability of broadband internet services and the factors that determine its costs. The other initiative is a collaboration with the Fair Trading Commission (FTC) to engage with the companies offering Submarine Cable Systems services, to adopt a more uniform approach in the prices offered to clients and possibilities for reducing the cost of international bandwidths, even if they are not stakeholders of these companies," he said.

Under the capital projects, Hassan said that the rehabilitation and expansion project of Port Victoria will begin in 2022. The first phase of the project will cost Euro 29.7 million and is being financed by European Investment Bank (EIB) and Agence Francaise de Development (AFD).

He said that the Seychelles international airport at Pointe Larue is also expected to be modernised and the government is working closely with the Seychelles Civil Aviation Authority on the different options for developing the airport.

The National Assembly will resume next week where the two leaders, Sebastien Pillay of the Opposition and Bernard Georges for Government Business, will give their responses to the budget.