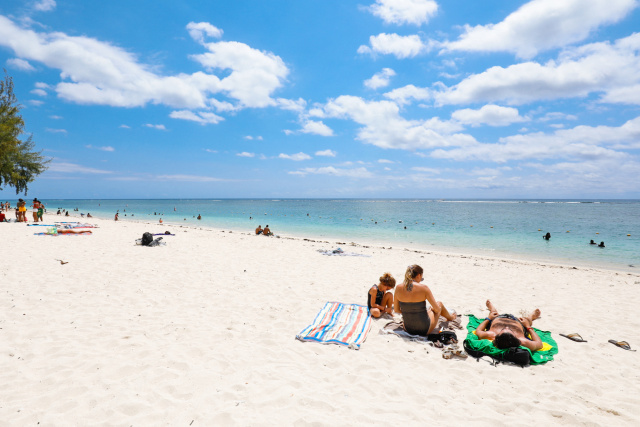 A general view of tourists on the Flic en Flac beach located on the western coast of Mauritius on November 3, 2021. A month after reopening its borders Mauritius is starting to see tourists on beaches again. (Laura MOROSOLI / AFP)

(AFP) - The Indian Ocean island paradise of Mauritius imposed a raft of new Covid-19 curbs on Friday as it confronted an upsurge in cases despite a high vaccination rate.

Prime Minister Pravind Jugnauth announced the restrictions in a televised address to the nation on Thursday, blaming people who were not abiding by health protocols for the increase in infections.

"The state alone will not be able to contain the spread of Covid-19," he said.

Mauritius had fully opened its doors to international visitors at the start of October, hoping to rebuild its vital tourism industry after long months of isolation because of the pandemic.

But according to latest figures reported to the World Health Organization as of Friday, Mauritius has 18,979 cases and 240 deaths compared with 15,695 infections and 84 deaths as of October 1.

Many of the new cases are linked to the Delta variant, according to the health ministry.

Schools in Mauritius were closed earlier this week, with all classes to be held online, while bars and discos have been ordered to shut and concerts and sporting competitions banned.

The government is also limiting numbers of people attending gatherings such as weddings, funerals and rallies, but said beaches would be open -- although picnics are prohibited.

In his address, Jugnauth highlighted the importance of getting the Covid jab and urged people to receive booster shots.

But he told parliament on Tuesday that since the start of the year, 61 fully vaccinated people had died in hospital in Mauritius.