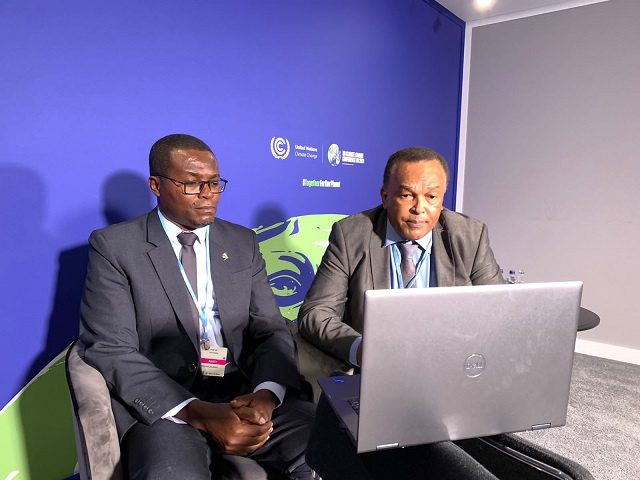 Minister Joubert with the technical adviser for climate change Wills Agricole at COP26. (Ministry for Agriculture, Climate Change and Environment)

(Seychelles News Agency) - Seychelles is disappointed with the outcome of the UN Climate Change Conference COP26, which a top government official said on Tuesday is unlikely to lead to the world containing global warming within 1.5 degrees Celsius.

The Minister for Agriculture, Climate Change and Environment, Flavien Joubert, who was part of a team of 12 Seychellois experts at the conference in Glasgow, Scotland, told reporters that Seychelles and small island states that form part of the Alliance of Small Island (AOSIS) are not 100 percent happy with the outcome.

"In fact, in some instances, we are quite disappointed because the ambitions that were communicated at the very beginning were not carried through to the end," said Joubert.

In 2009 and again in 2015, developed countries promised to mobilise $100 billion by 2020 and through 2025 to help developing nations respond to climate change and reduce emissions, for example, by investing in renewable energy or flood defences.

One of the aims of COP26 was to get developed countries to fulfil the pledge and that half of the money would go toward helping developing nations adapt to the worst effects of climate change.

Joubert said that the progress made in the last years should have been much more and that there should be more commitment especially from the big emitters.

The larger and more industrial countries such as the United States and China -- also the biggest emitters of greenhouse gases -- tend to have a louder voice. It is for this reason that small island states join forces when negotiating on issues concerning climate change.

"Our position was communicated through the Alliance. We also had the opportunity to discuss directly with the Secretary General of the United Nations and we hope that they take on board our positions," said Joubert.

A team from Seychelles, an archipelago in the western Indian Ocean, attended the conference to communicate the ambitions and concerns of the island nations on climate change that is the Nationally Determined Contributions (NDCs).

NDCs are an important part of the Paris Agreement, whereby countries have to detail and make known their plans to reduce national emissions and adapt to the impacts of climate change.

On the issue of the climate change negotiations, Joubert said there were some commitments made that will help in the climate change cause, such as the pact to end deforestation by 2030 which he said is going in the right direction.

"Despite the fact that they are pointing in the right direction, the amount of commitment under those declarations are not sufficient and we are not happy with the way there are presented. Very importantly for us, the commitments presented in the different NDC reports will not lead us to contain this 1.5-degree Celsius target," he said.

In addition to discussing its future, Seychelles also took the opportunity to hold talks with representatives of the Food and Agricultural Organisation (FAO) and a mission from the organisation is expected to discuss more with local partners on how to bring the farming community to adapt to climate change.

"We had bilateral discussions with several partners who are able to provide us with financial support like the Commonwealth, Transformation Fund and the NDC partnership," he said.

Meanwhile, the officials who attended the conference said that despite many of their positions not being taken into account, Seychelles will continue striving to get the emitters to show more commitment to the cause.