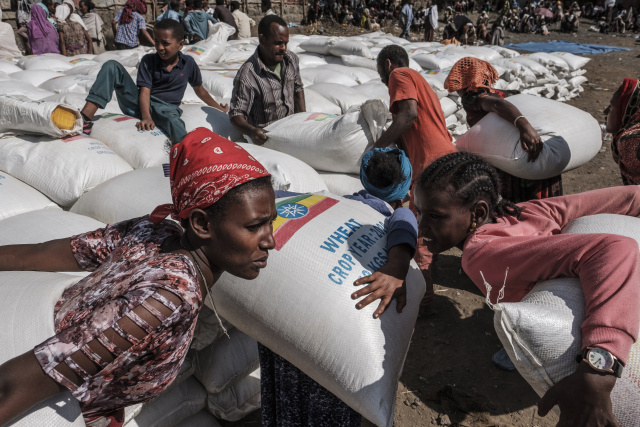 (FILES) In this file photo taken on December 11, 2020 Women carry sacks of wheat during a distribution of food organised by the Ethiopian government in the city of Alamata, Ethiopia. With thousands dead, two million displaced and mounting fears of a rebel march on Addis Ababa, Ethiopia's war threatens to unleash instability across the fragile Horn of Africa region even as envoys scramble to end the year-long conflict.
(EDUARDO SOTERAS / AFP)

(AFP) - Top diplomats from the African Union and United States returned to Ethiopia Thursday as part of a ramped-up push to broker a ceasefire in the country's north, the foreign ministry said.

"They came today. Both of them," ministry spokesman Dina Mufti said, referring to Olusegun Obasanjo, the AU's special envoy for the Horn of Africa, and his American counterpart Jeffrey Feltman.

Both men also visited the country earlier this month in a push to facilitate a deal between Prime Minister Abiy Ahmed's government and the Tigray People's Liberation Front (TPLF) rebel group, which has been advancing south and has not ruled out a march on the capital Addis Ababa.

Obasanjo made two trips to Tigray's capital Mekele to meet TPLF leaders on his earlier trip, a sign of progress after multiple statements in which the TPLF dismissed the AU, which is headquartered in Addis Ababa, as biased in favour of Abiy's government.

A TPLF source told AFP Thursday that Obasanjo may return to Mekele this week.

At a weekly press conference Thursday, Dina said Obasanjo "was shuttling between the various forces" as part of "a fact-finding type of mission."

"I think he's investigating. He's talking to different partners. At the end of the day, he will come out with a proposal. That proposal is not yet obvious," he said.

"The same thing holds true for Mr Feltman," he added.

US Secretary of State Antony Blinken renewed Washington's call for a ceasefire during a visit Wednesday to Kenya, his first stop on his first trip to sub-Saharan Africa since becoming President Joe Biden's top diplomat.

Kenya has also played a role in trying to end the conflict, and Foreign Minister Raychelle Omamo told a joint news conference Wednesday that her government believes "a ceasefire is possible".

The conflict broke out last November after Abiy, winner of the 2019 Nobel Peace Prize, sent troops into Tigray to topple the TPLF, a move he said came in response to TPLF attacks on army camps.

Though he promised a swift victory, by late June the TPLF had retaken most of Tigray including its capital Mekele, and its fighters have since pushed into the neighbouring regions of Amhara and Afar.

Last week Dina said any "peaceful solution" would require the TPLF's withdrawal from Afar and Amhara, something the TPLF has dismissed as "an absolute non-starter" as a condition for talks.

The TPLF, meanwhile, has called on Abiy's government to break what it describes as a humanitarian "siege" of Tigray, where the UN estimates hundreds of thousands of people are living in famine-like conditions.

AFP reported this week that nearly 200 young children had died of starvation in 14 hospitals in the region, citing data collected by local doctors and researchers.

General » Be a reporter: Write and send your article » Subscribe for news alert
Tags: Ethiopia, conflict