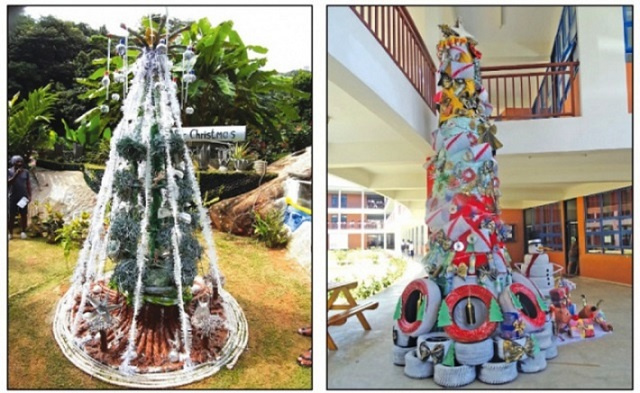 Last year's winners were Andre Bristol for the home category and Perseverance Secondary school in the school category. (Seychelles Nation)

(Seychelles News Agency) - Bringing people together and creating a warm sense of community is the aim of the organisers for this year's edition of the recycled Christmas tree competition which is open for interested participants until the end of November.

The competition which was launched last week is open to schools, homes, districts, the private sector and civil society.

Initiated in November last year, the competition seeks to encourage people to use things they have discarded and create aesthetically pleasing Christmas trees.

The director general for public education and community outreach, Jeanette Larue, told reporters that "we have expanded the competition because last year competition was just a trial and we received a lot of demands especially from the business sector, public service institutions and hotels who got in touch and communicated their intentions to take part with the aim of having something different for their clients."

In view of the increase in participants Larue said that "this year we began looking for sponsors very early and we managed to find some, as a result turning this competition into something bigger."

According to Allen Commettant who will oversee the judging process the focus is on recycling.

"Participating individuals and organisations will also be judged according to the diversity of recycled or natural materials used, originality and uniqueness of the designs/décor, creativity, coherence and craftsmanship of the tree, overall appearance, appeal, visual impact and bio-degradability of the tree or re-usability," said  Commettant.

Registration is open until the end of November and interested parties can contact Allen Commettant on 2716507 or Clive Clarisse on 2827096.

Judging for the school will take place at the end of this month while for the others will be done in the first two weeks of December.

"For the district category we want the entries to have their Christmas trees in an area where the inhabitants can come and interact with the art found there and create a festive atmosphere," he added.

While the organisers are intent on having work of quality in this year's competition, Larue is also encouraging workplaces and businesses to have their own employees make their trees instead of simply paying a seasoned artist to do it for them.

"However in the district category, they may enlist the help of such artists if they live in the district and turn the whole process into one that brings their community closer," she added.

People who are also good at handicrafts are also urged to take part, so as to showcase the work of local craftsmen.

"There are people who produce quality work made out of driftwood that is equally as good as those imported from overseas. This is a chance to show just how good those made locally can be and decrease the need to import the same items from overseas," said Larue.

Last year's winners were Andre Bristol, a resident of the southern district of Anse Royale, for the home category and Perseverance Secondary school in the school category.