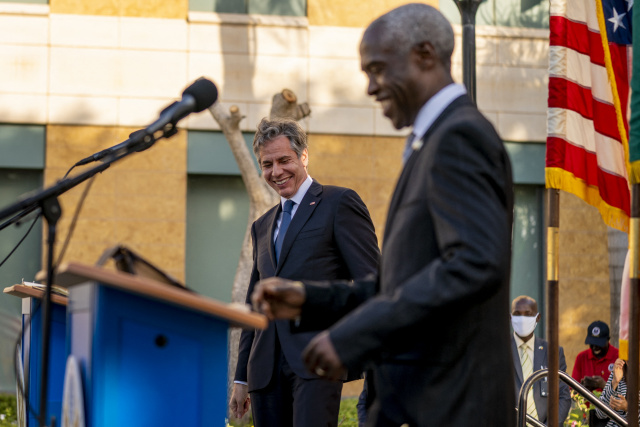 US Secretary of State Antony Blinken (C) laughs as US Ambassador to Senegal Tulinabo Mushingi (R) dances to music while introducing him to speak to employees and their families at the US Embassy in Dakar, on November 20, 2021, as part of Blinken's five day trip to Kenya, Nigeria, and Senegal. (Andrew Harnik / POOL / AFP)

(AFP) - US Secretary of State Antony Blinken on Saturday promised new investment in Senegal in a bid to showcase democracy's benefits as he wrapped up his first visit to Africa.

The top US diplomat has sought to offer a more nuanced take on the growing US rivalry with China, by showing how the United States can offer partnerships without overtly pressing African leaders to shun their ever-growing commercial links with the Asian power.

During a visit to Senegal, Blinken took part in the signing of contracts worth $1 billion with US companies. They included a technology contract with public security services and a project to reduce traffic jams through better road development.

He also visited the Institut Pasteur where he promised support to help Africans make their own vaccines. President Joe Biden has promised to donate more than one billion doses worldwide.

"The United States is committed to strengthening our partnerships across the continent in ways that serve the interests of people here -- serve our own interests.

"We firmly believe that it is long past time to start treating African countries and institutions as the major geopolitical players that they've become."

In a speech in Nigeria on Friday, Blinken had said there was no need for Africans to choose partners, a sentiment welcomed by Senegalese Foreign Minister Aissata Tall Sall.

"There isn't a choice, there are only choices," she said. "Africa is an opportunity."

"Our diplomacy is about sovereignty and not excluding anyone. But also we have traditional friends and historic partnerships and we're not throwing away the old ones for the new ones."

Senegal has long been one of Africa's most stable nations, with successful peaceful transitions of power.

But tensions have flared up between President Macky Sall's government and the opposition this year, with riots erupting in March after a leading opposition figure was arrested.

Days after the latest detention of an opposition leader, Blinken weighed in.

"Senegal has long served as a democratic model in sub-Saharan Africa," he said.

During his time in Senegal, he also took time to warn Moscow that Washington was closely monitoring the activities of the shadowy Russian mercenary group Wagner in Mali.

He backed the recent sanctions imposed by the West African economic bloc ECOWAS against key members of Mali's military junta there to try to force them to hold promised elections early next year.

"I would only add that I think it would be especially unfortunate if outside actors engage in making things even more difficult and more complicated, and I'm thinking particularly of groups like the Wagner Group in Mali," he said.

While Blinken's praise and promises of assistance found a welcome response in Senegal, President Joe Biden's emphasis on climate change has prompted mixed reactions on his three-nation trip.

At the recent COP 26 summit in Glasgow, the Biden administration backed calls to transition from fossil fuels responsible for the severe worsening of the global climate.

Blinken vowed that the United States would support developing nations with the transition.

But while Kenya, Blinken's first stop, has moved aggressively on the environment, Nigeria and Senegal both see fossil fuels as vital money makers, with Senegal getting ready to become a major gas producer.

Tall Sall questioned whether the world could switch entirely to renewable energies such as solar and wind.

"Today we have to support gas as a transitional energy, and we expect the support and understanding of the United States."

General » Be a reporter: Write and send your article » Subscribe for news alert
Tags: US, Senegal, diplomacy