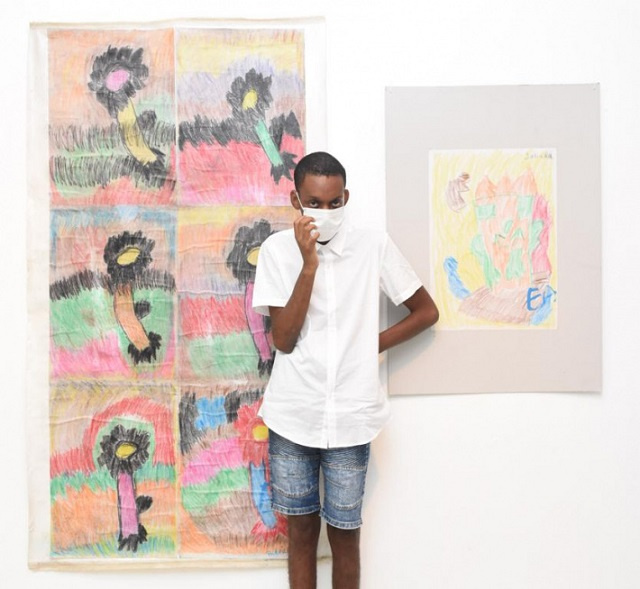 (Seychelles News Agency) - Emotion-filled abstract paintings inspired by the death of his mother are part of the first-ever exhibition by an autistic artist from Seychelles at Carrefour des Arts in the capital, Victoria, until December 3.

Patrick Alexis, a 35-year-old artist with autism living in Roche Caiman, launched his exhibition recently with around 28 abstract paintings.

His artwork is mostly inspired by emotions felt following the death of his mother, Juliana Alexis, who was diagnosed with cancer and passed away in February last year.

Since Patrick's mother got sick, Patrick has been in the care of his cousin Robert Alexis, who has helped to ignite his interest and abilities in art. Two of Patrick's favourite paintings on display are one picturing his sick mother and another in which he painted multi-coloured flowers also as a remembrance of her.

"I wanted to help him do something that would make him happy and make his mother happy as well. I felt that providing him with the supplies to do art was a good way to show him that life goes on despite his mother being very ill at the time," said Robert.

Patrick's paintings on canvas are abstract in nature, painted with acrylic paint and wax crayons, with perfectly chosen and specific colours that relate to his emotions. His cousin, Robert Alexis, a professional artist and sculptor, has on display seven pieces of abstract paintings in two dimensions.

Robert, who found himself with the responsibilities of looking after his sick aunt and Patrick said that "initially I wanted to hold an exhibition for my 50th birthday, but I could not as I had to care for Patrick and my aunt."

Autism is a life-long developmental disorder that affects how a person communicates with and relates to other people due to the abnormal development and functions of the brain. It has no known single cause and is more likely to affect boys than girls from all racial, ethnic and social groups.

To prove to the guests at the opening of the exhibition that Patrick had indeed done all his own work, Robert had set up an aisle and some paint so the young man could show people what he is capable of.

When officially opening the exhibition, the SeyLar Federation chairman, Danny Sopha said that this was just the beginning of the work Patrick will be able to produce and that "he should be taken in hand to develop to his full potential".

SeyLar is a federation found in the Seychelles, an archipelago in the Indian Ocean, that promotes Seychellois visual artists.

Some paintings have already been sold but Patrick's two favourite paintings were not for sale.

8 global artists, 11 Seychellois to participate in Biennale of Contemporary Arts