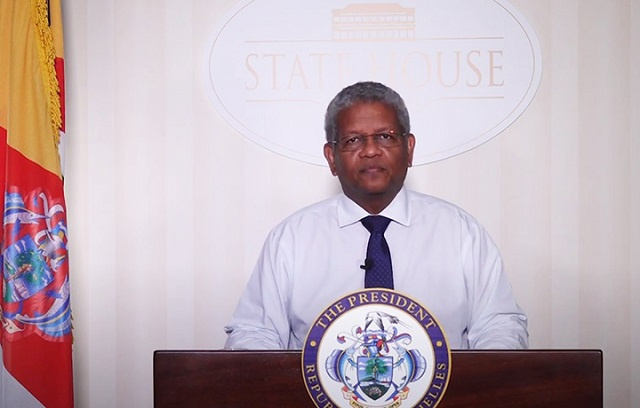 Ramkalawan said that the country is stable and that there is no talk of a coup d'etat nor plans for subversion or violence. (State House)

(Seychelles News Agency) - President Wavel Ramkalawan of Seychelles said in a special TV address on Monday that rumours and speculation about the case of a missing $50 million are causing people to live in fear.

Three people -- a couple and a senior officer in the Seychelles People's Defence Forces -- have been arrested and have been remanded by the Supreme Court until December 3. They are linked to the case of the disappearance of $50 million granted to the Seychelles' government by the United Arab Emirates in 2002.

Ramkalawan said that since he made the announcement in a communique last week this has brought about many rumours and many speculations among the people.

Last week Ramkalawan said that he had been informed by the Anti-Corruption Commissioner that the commission has started working on the disappearance of the missing $50 million and through its investigations some people have been arrested.

"During this weekend, I am sure you all got all kinds of messages. I also received those messages and this is the reason why tonight I want to tell you that there is no reason for people to be afraid and I ask that all those rumours and speculation stop," he said.

"Those speculation and rumours are not bringing any good to our country. There are people who are afraid when they read those messages or hear these words. Do not let any of those words worry you," added Ramkalawan.

The head of state of Seychelles, an archipelago in the western Indian Ocean, said that the country is stable and that there is no talk of a coup d'etat nor plans for subversion or violence.

"Our country on the contrary is walking on the road of peace, a road of prosperity and we are doing extremely well. So I want to make an appeal to all the people who are sowing these words. Please stop... I ask that we let the institutions do their work in all independence," said the President

"It is not the people of Seychelles who will judge these people but the court and everyone even those arrested have rights under the law. They have the right to have their lawyers defend them. So please let the different authorities do their job in a professional and straight manner while respecting the constitutional rights of the different persons," he added.

Ramkalawan said that there is no reason for the people to live in fear.