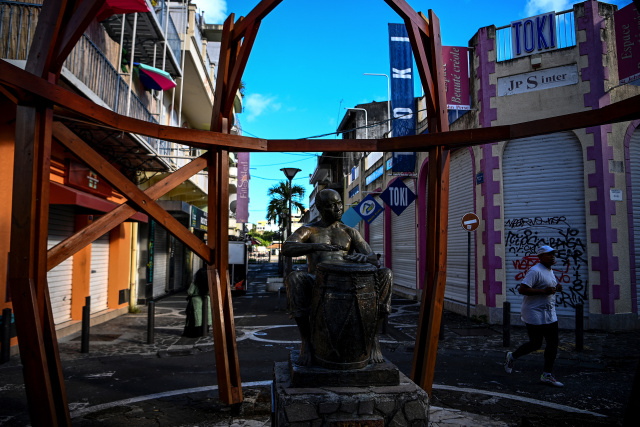 A man jogs past closed shops in central Pointe-a-Pitre on the French Caribbean island of Guadeloupe on November 22, 2021 following days of rioting against Covid-19 measures. (Christophe ARCHAMBAULT / AFP)

(AFP) - School cancelled, barricades on the street and pharmacies trashed: days of rioting against measures to curb the spread of Covid-19 have brought normal routines on France's Caribbean island of Guadeloupe to a standstill.

Paris authorities sent elite police and counter-terrorism officers to Guadeloupe over the weekend in a bid to quell the violence, the latest Covid-related headache in France's overseas territories for the government of President Emmanuel Macron.

Vaccination rates in France's overseas territories, in the Caribbean, Indian Ocean and the Pacific, have generally been far lower than those on the mainland and there has been repeated unrest over anti-virus measures.

Protests in Guadeloupe, a territory of roughly 400,000 people, broke out after an announcement that coronavirus jabs would be mandatory for all healthcare workers, with the demonstrations marred by clashes and looting.

Macron acknowledged the gravity of the situation and urged local politicians not to mix the pressing issue of Covid with colonial-era grievances and also longstanding complaints the territory is economically neglected by Paris.

"We will not give in to lies, distorting of information and the exploitation by some people of this situation," he told reporters on a visit to the northern French city of Amiens, calling the situation "very explosive".

"We do not play with health and we will not let the health of the French be played with for the sake of political infighting," he added.

The police reinforcements began dismantling protesters' road barricades shortly after their arrival, according to Colonel Jean Pierre from the gendarmerie in Pointe-a-Pitre, the island's main city.

Later on Monday, Prime Minister Jean Castex said, after holding a videoconference with local officials, that a forum for dialogue was being created to help healthcare professionals who might be worried by the vaccine obligation.

The barricades had impeded traffic, forcing the closure of schools on Guadeloupe's main island on Monday, the education ministry said.

The Guadeloupe prefecture said protesters fired on security forces and firefighters, adding that "organised gangs" were now also involved in the unrest.

Even though some barricades had been dismantled, "the situation remains uncertain concerning road traffic and the possibility of staff and students moving smoothly and safely seems compromised at this stage", the local authorities said in a statement.

Thirty people will appear in court on Monday in Pointe-a-Pitre for allegedly participating in the unrest, according to local prosecutor Patrick Desjardins.

Government spokesman Gabriel Attal called the situation "intolerable and unacceptable" and vowed a tough response against a "small minority" who were intimidating health workers, preventing pharmacies from opening and even using barricades to block ambulances.

Over the weekend, Guadeloupe's main trade union the UGTG called for continued protests.

While the demonstrations were sparked by the vaccine mandate, they also express "the depth of suffering, inequality, poverty and exclusion felt by the people, notably youths and the elderly," said UGTG secretary general Maite Hubert M'Toumo.

Since summer, Guadeloupe's vaccination drive has picked up, with 90 percent of healthcare workers vaccinated, as well as nearly half the general population.

In mainland France, the vaccinate rate is close to 75 percent of the population.

In the neighbouring French overseas territory of Martinique meanwhile, a general strike has been called for Monday, calling for an end to obligatory vaccination for health workers but also for wage rises and other social grievances.