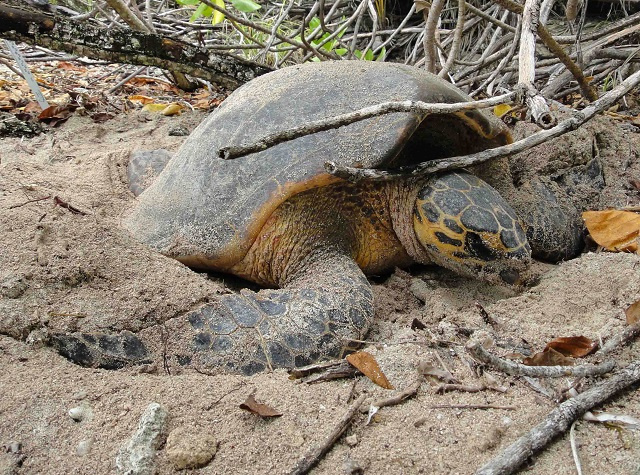 MCSS is seeking assistance with the monitoring of the hawksbill turtles during its nesting season. (Jeanne Mortimer)

(Seychelles News Agency) - The Seychelles Breweries is the first company to be part of the 'Adopt a Beach' programme with the Marine Conservation Society Seychelles (MCSS) to assist with the monitoring of the hawksbill turtles during its nesting season.

The company signed a partnership agreement with MCSS to adopt the Anse Bazarca, one of the beaches the Society has been monitoring sea turtle nesting activities since 2003.

Under the agreement, Seychelles Breweries and its employees will support MCSS' efforts to enhance and rehabilitate turtle nesting grounds, monitor nesting activity, and promote the conservation and protection of nesting sea turtles on Anse Bazarca.

"This is a pilot programme where MCSS and Seychelles Breweries will work together during the turtle nesting season, from September to March. The local brewery will provide financial and physical support during monitoring, cleaning and beach rehabilitation exercises during the season," said the chief executive of MCSS, Christophe Mason-Parker.

Seychelles breweries has already provided MCSS with a cheque of SCR50,000 ($3,800) to help with these activities.

The beach in the southern part of the main island of Mahe has been nominated by MCSS for seasonal protection during the hawksbill nesting season from October to March. During the species' nesting season, around 40 to 90 female hawksbill turtles nest on the beach and those that the MCSS team encounter during their monitoring activities are photographed in order to identify them.

All turtles encountered on Anse Bazarca during the nesting season will be sponsored by Seychelles Breweries. The company will have the opportunity to name them and receive a certificate of sponsorship for each turtle with their chosen names, photographs of the turtle and information on whether they have been encountered before.

"Aside from Anse Bazarca, the MCSS also monitor turtle nesting activity on five other beaches in the country, where we do regular patrols on foot as well as by using drones," said Mason-Parker.

MCSS has said that while this will be the only such partnership for this season if it proves successful, the Society will be looking at others companies or groups in the future as they want to see more community involvement in the preservation of sea turtles in Seychelles.

In Seychelles, an archipelago in the western Indian Ocean, sea turtles are protected in Seychelles under the 'Wild Animals and Birds Protection Act of which the Wild Animals (Turtles) Regulations enacted in 1994, completely bans all disturbances, harvest, sale, possession of turtles, turtle products or eggs.

Mason-Parker is calling on the public to inform the authorities whenever they witness any illegal practice being done involving sea turtles, to continue ensuring their survival.