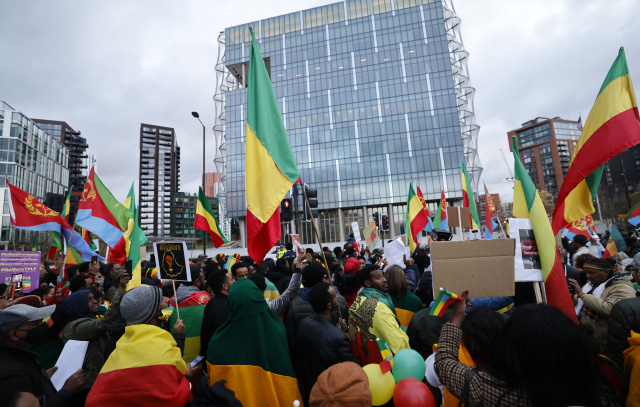 Demonstrators hold Ethiopian flags as they protest outside of the US Embassy in London on November 21, 2021, demanding a stop for what they say is American support for the Tigray People's Liberation Front (TPLF), a rebel group in conflict with the Ethiopian authorities. US Secretary of State Antony Blinken renewed Washington's call for a ceasefire during a visit to Kenya, after warning last week that Ethiopia risked "implosion" unless the government and the TPLF negotiate a deal. (Tolga Akmen / AFP)

"Starting tomorrow, I will mobilise to the front to lead the defence forces," Abiy, winner of the 2019 Nobel Peace Prize, said in a statement posted on Twitter.

"Those who want to be among the Ethiopian children who will be hailed by history, rise up for your country today. Let's meet at the front."

It also came after the ruling Prosperity Party's executive committee met Monday to discuss the war, which has dragged on for a year.

After that meeting, Defence Minister Abraham Belay told state-affiliated media that security forces would embark on a "different action", without providing details.

"We can't continue like this, that means there will be change," Belay said.

"What happened and is happening to our people, the abuses being meted out by this destructive, terrorist, robber group, can't continue."

Abiy sent troops into Ethiopia's northernmost Tigray region to topple the TPLF in November 2020, saying the move came in response to TPLF attacks on army camps.

Though he promised a swift victory, by late June the TPLF had regrouped and retaken most of Tigray including its capital Mekele, prompting the federal army to largely withdraw from the region.

Since then the TPLF has pushed into the neighbouring Afar and Amhara regions.

It has also formed an alliance with other insurgent groups including the Oromo Liberation Army (OLA), which is active in the Oromia region surrounding Addis Ababa.

The war has already killed thousands and pushed hundreds of thousands into famine-like condition, according to the UN.

Fears of a rebel advance on the capital have prompted several countries including the US and the UK to pull out non-essential diplomatic staff.

These countries are also urging their citizens to leave Ethiopia while commercial flights are still available.

The government says rebel gains, and the threat to Addis Ababa, are overstated.

Officials did not respond to a request for comment on the TPLF's claim to hold Shewa Robit.

The African Union's special envoy for the Horn of Africa, Olusegun Obasanjo, is leading a frantic push to broker a ceasefire, but so far there has been little concrete progress.

Over the weekend he wrapped up his second visit to the country this month, which included a third round of meetings in Mekele with TPLF leaders.

After Obasanjo left, however, the TPLF accused Abiy's government of carrying out "a drone attack in a residential area" in Mekele.

Several witnesses said they heard at least two explosions before dawn Sunday, though AFP could not independently verify the TPLF's claim.

Later Sunday the TPLF said in a statement that the incident was a sign that Abiy's government was not serious about a peace deal and only wanted "to prolong their stay in power".