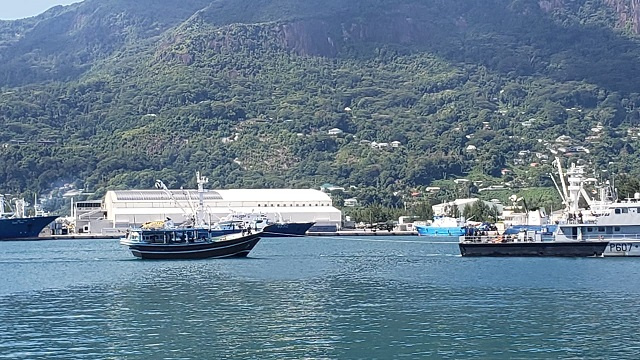 On November 20 the dhow was placed into the hands of the Seychelles Coast Guard and then escorted to Port Victoria. (Salifa Karapetyan, Seychelles News Agency)

(Seychelles News Agency) - A Seychellois man who was being held on an Iranian dhow as part of a drug deal was released to the local police force on Thursday.

The Iranian dhow was intercepted by the Indian authorities outside the Seychelles' Exclusive Economic Zone after information had been shared on the presence of a Seychellois man on board the vessel.

Andy Bistoquet, a resident of the eastern district of Anse Aux Pins, was reported missing in the beginning of November and the Seychelles Police Force had issued missing person notices on November 4 and 7.

The Police did not give further information on why Bstioquet was on board the dhow.

In a press conference last year, former President Danny Faure, said that some missing persons in Seychelles are linked to a drug trafficking network involving Iran. He said that according to intelligence shared by a friendly country Seychellois are boarding Iranian boats and will only be released when the money for the drugs is paid.

On November 20 the dhow was placed into the hands of the Seychelles Coast Guard and was then escorted to Port Victoria. The Police said that this is the first time a Seychellois held on a dhow in exchange for drugs has been rescued.

The deputy commissioner of police, Francis Songoire, told reporters that the return of Bistoquet is linked to an ongoing drug bust investigation that started earlier this month.

"At the beginning of the month, the Seychelles Coast Guard together with the Seychelles Police intercepted two local boats. They were brought in on suspicion of drug importation and other drug-related offences. In the middle of the investigation of the bust, we established that there was a Seychellois who had been exchanged for drugs onboard an Iranian vessel. Instead of staying only in Seychelles, the investigation took another dimension, leading to coordination and exchange of information, especially with the Indian authority," explained Songoire.

He added that as a safety measure "we brought health officials to the coast guard to examine the Seychellois man upon his arrival."

Onboard the dhow, there are 11 Iranians who will be processed, along with the vessel, by the local police force.

The police said that more information will be communicated on what will happen to Bistoquet while the investigation continues.