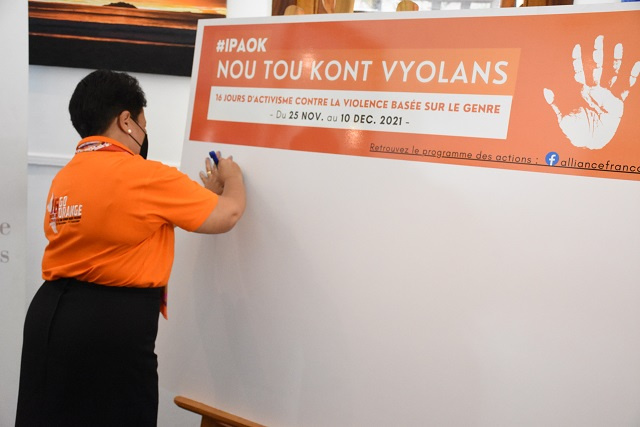 First Lady, Linda Ramkalawan, was the first to symbolically draw her hand on a large board, showing she was against such violence happening in society. (Seychelles Nation)

The 16 Days of Activism against Gender-Based Violence is an annual international campaign that begins November 25, the International Day for the Elimination of Violence against Women, and runs until December 10, Human Rights Day.

The Minister for Youth, Sports & Family, Marie-Celine Zailor, launched the campaign Thursday in a short ceremony.

Three organisations participating in the campaign are End Rape in Seychelles, Stand Up Step Up and the Lesbian, Gay, Bisexual, Transgender and Intersex Seychelles (LGBTISey) to fight against discrimination and violence in the country.

The three not-for-profit organisations aim are to bring attention to the problem and highlight the importance of working together to address them.

Stand Up Step Up works with schools to address the issue of bullying while LGBTISey educates people on the rights of the LGBTI community. Homosexuality was decriminalised in Seychelles in 2016.

ERIS is an organisation launched in March to raise awareness on sexual assaults which has been a taboo subject in Seychelles, a group of 115 islands in the western Indian Ocean.

Seychelles' First Lady, Linda Ramkalawan, was the first to symbolically draw her hand on a large board, showing she was against such violence happening in society.

"I believe we need to continually put the focus on education and awareness not only during the 16 days every year in November, but throughout the whole year," Ramkalawan said.

While Seychelles, with a population of around 99,000 inhabitants, is amending its laws to better protect victims of abuse and violence, Ramkalawan said that "we have an important role to play in our own protection. Here I am not talking about enforcing circumstances, but rather the decisions we make knowingly, but nevertheless, do so negligently."

On his side, the French ambassador to Seychelles, Dominic Mas, said the speed at which the different associations came together for this event is "a sign of their commitments to end violence against women and is an encouraging sign for the way forward in this fight."

Members of the public are also encouraged to show their support to the cause by paying a visit to Kenwyn House and drawing their hands on the board.

The associations behind this campaign together with L'Alliance Française are also encouraging the tech-savvy to post to their hashtags: #IPAOK and #NOUTOUKONTVYOLANS.

General » Be a reporter: Write and send your article » Subscribe for news alert
Tags: 16 Days of Activism, End Rape in Seychelles, Stand Up Step Up, LGBTISey