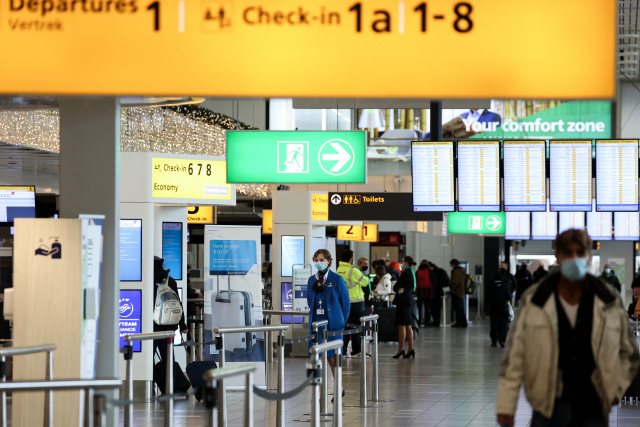 Passengers walk at the Schiphol airport on November 29, 2021. Dutch health authorities said November 29 they have found another case of the new Omicron Covid-19 variant among passengers arriving from South Africa, bringing the total to 14. "With the help of sequencing, it has now been confirmed in 14 people that it is the Omicron variant," Health Minister Hugo de Jonge said in a letter to parliament. (Kenzo TRIBOUILLARD / AFP)

(AFP) - More African countries on Monday joined the rush to suspend air links with the south of the continent after the emergence of a new Covid variant, sparking a cry of anguish from South Africa.

The world's widening travel bans also prompted the postponement of Africa's biggest shop window for investment, as a glittering top-name gathering in Abidjan was postponed.

After Angola, Mauritius and the Seychelles, Gabon and Rwanda became the latest African nations to join Europe and other regions to halt flights from South Africa or its neighbours.

South Africa -- which says it is being made a scapegoat for discovering the Omicron variant -- reacted with dismay.

"It is quite regrettable, very unfortunate, and I will even say sad, to be talking about travel restrictions imposed by a fellow African country," foreign ministry spokesman Clayson Monyela said.

"What I don't understand is that some of these African countries that are doing this, know the struggles (that) as a continent we have, where European countries will take this decision and impose travel bans," he said.

South Africa, he noted, had recently made "substantial donations" of vaccines to some of the countries that were now imposing flight bans.

"When a fellow African country does that, especially in the context where most of these countries are beneficiaries... it doesn't make sense," he told an online news conference organised by the health ministry.

Dozens of nations from Europe to Asia have imposed travel restrictions on South Africa and its neighbours since its scientists flagged the variant, named Omicron, last Thursday.

Rwanda announced late Sunday that it was halting direct flights to and from nine countries in southern Africa.

All passengers who landed from those countries in the past seven days now have to spend a week in quarantine in designated hotels -- at their own cost.

In Libreville, the Gabonese transport ministry on Monday announced a ban on the entry of travellers from eight southern African countries "whose final destination is Gabon."

The eight include Angola, as well as Botswana, Eswatini, Lesotho, Mozambique, Namibia, South Africa and Zimbabwe.

On Saturday the director of the Mauritius Tourism Promotion Authority, Arvind Bundhun, said in a statement that it was "with regret" that the government took the decision to suspend all flights from southern Africa.

Angola -- itself among the blacklisted southern African nations -- at the weekend suspended all flights to and from Mozambique, Namibia and South Africa until further notice.

An outraged South African President Cyril Ramaphosa on Sunday said the curbs were scientifically unjustified and called for them to be "immediately and urgently" reversed.

Health Minister Joe Phaahla on Monday said many South Africans had felt the country had hastened to go public with the discovery of the new Omicron variant and that had it "kept quiet, travel bans would not have happened".

"But that would have been detrimental, because our approach is for our citizens to not live in false security and false safety," said Phaahla.

South African scientists won applause from Namibian President Hage Geingob, who said they had "unwittingly drawn fire and condemnation" for their country.

The travel restrictions have dealt a new blow to South Africa's tourism industry, which had hoped the southern hemisphere summer would bring an influx of visitors from the well-heeled north.

The African Development Bank (AfDB), meanwhile, said its 2021 Africa Investment Forum, scheduled to run in Ivory Coast's economic hub of Abidjan from Wednesday to Friday, was being postponed until further notice.

Investment projects amounting to "several billion dollars" had been readied for the forum, where investors and corporate chiefs meet, AfDB President Akinwumi Adesina said in a press statement.

"Unfortunately, with rising global travel restrictions due to the Covid-19 Omicron variant, and heightened concerns for health and safety, it is necessary, regrettably, to postpone the event," he said. "The health and safety of everyone comes first."

Ramaphosa was among several heads of state expected for the forum, now in its third edition, which was for the first time being held outside South Africa.