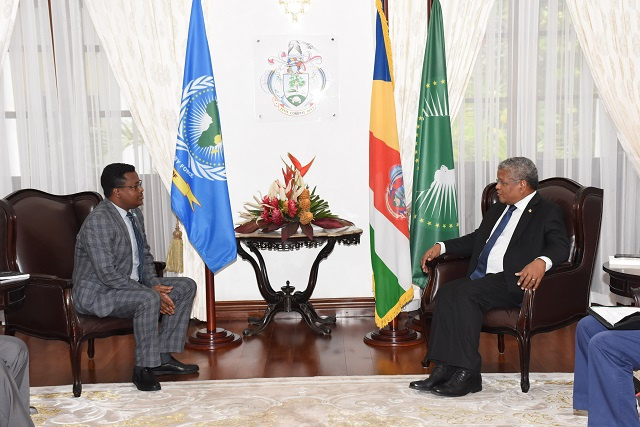 (Seychelles News Agency) - The possible maritime security assistance to Seychelles by the East African Standby Force (EASF) was one of the areas discussed between the director of the force and President Wavel Ramkalawan on Thursday.

"We updated the President on areas that EASF needs cooperation. We also updated him on how to strengthen the regional security," Fayisa told reporters.

Seychelles, a group of 115 islands in the western Indian Ocean, is one of the 10 countries that make up the EASF alongside Burundi, Kenya, Uganda, Djibouti, Comoros, Sudan, Rwanda, Ethiopia and Somalia.

As the organisation consists of multi-dimensional forces, "our member states need different things in areas of security; for Seychelles, it is in the area of maritime. We as EASF also have a maritime side and we are working on it," said the director.

EASF was established as a regional mechanism to provide capability for rapid deployment of forces to carry out preventive deployment, rapid intervention, peace support/stability operations and peace enforcement.

"All those forces are responsible for our region's peace and security. All those areas are areas that we work and cooperate together," said Fayisa.

This is the first visit of a delegation from the EASF to Seychelles since October last year.

The Eastern Africa Standby Force deployed a team of 10 observers as part of the international election observer mission to observe the legislative and presidential elections process in October 2020.