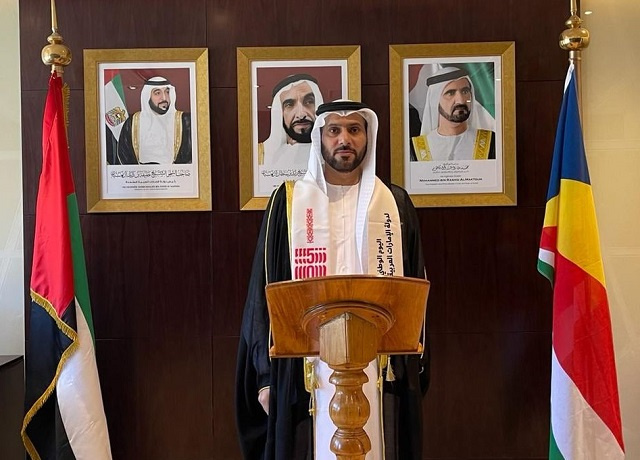 Ahmed Alneyadi, the UAE Charge d'Affaires, said that UAE through its founding father Sheikh Zayed has underlined the values of tolerance, peace, and stability. (Seychelles Nation)

To mark the occasion, the UAE embassy in Seychelles, an archipelago in the western Indian Ocean, organised a short ceremony via Zoom amid the restrictions in place due to COVID-19

In his message to mark the occasion, Ramkalawan said, "Fifty years after becoming a free and independent nation, we are reminded of the vision and legacy of the Founding Father of the Nation, the late Sheikh Zayed."

Ramkalawan said that the Federation has stood the test of time evidenced by the "respect that the UAE commands in the community of nations and the recognition that you enjoy as a global centre of excellence and innovation, and as a nation of peace and tolerance."

"On this historic occasion, we pay tribute to your leadership and to the enterprising spirit of the United Arab Emirates. Seychelles is proud of our decades-long association with the United Arab Emirates. Ours is a relationship based on friendship and understanding, on mutual respect and shared values. It has yielded many dividends and will, I am confident, continue to do so in the future," added the President.

On his side, Ahmed Alneyadi, the UAE Chargé d'Affaires, said that UAE through its founding father Sheikh Zayed has underlined the values of tolerance, peace, and stability.

"His strategy and visions for his country is reaping the fruits he sowed for this great nation, which displays friendship towards all people, cultures, promotes moderate Islam and to work mutually, which is favourable for all nations," said Alneyadi.

"Despite the challenges the world is facing due to the Covid-19 pandemic, UAE was amongst the first country in the world to open up and return life back to normal in the shortest time. Businesses have since then experienced rapid growth," he added.

"As we celebrate the Golden Jubilee, the future proves that the UAE will continue forward in standing by the just causes. The UAE has always sought to build bridges and play a positive role on both regional and global levels. Over the coming years, the UAE will strengthen this vision by continuing to play a positive role in improving cooperation and fostering dialogue, diplomacy and constructive engagement," said the Chargé d'Affaires.

Diplomacy » Be a reporter: Write and send your article » Subscribe for news alert
Tags: 50th National Day, Founding Father of the Nation