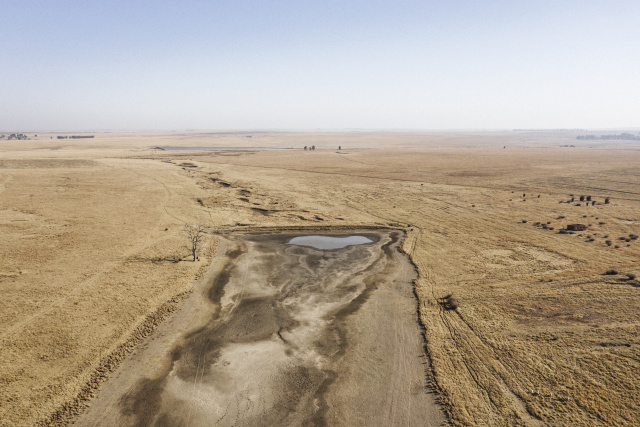 An aerial view shows a dried up pond set on farmland belonging to South African farmer Stefan van Huyssteen outside Senekal, on October 15, 2020. Stefan van Huyssteen, 68 has drastically scaled down his sheep farming business due to theft.
He has slashed his herd from 2,300 to a mere 60.
Theft of sheep has escalated in recent years, so have violent attacks. (MARCO LONGARI / AFP)

"About 2.3 million people in 57 of 74 districts... are ravaged by serious water, food and pasture shortages as water pans and boreholes have dried up," raising the risk of water-borne diseases, the Office for the Coordination of Humanitarian Affairs (OCHA) said.

The Horn of Africa was "on the verge of a fourth consecutive failed rainfall season", it added in a statement released late Thursday.

The dire situation has already forced nearly 100,000 people to flee their homes in search of food, water and pasture for their livestock, the UN agency said.

In recent years, natural disasters -- not conflict -- have been the main driver of displacement in Somalia, a war-torn nation that ranks among the world's most vulnerable to climate change.

"A perfect storm is brewing in Somalia," said Adam Abdelmoula, the UN resident and humanitarian coordinator for the country, calling for urgent action to prevent famine conditions from taking hold.

Somalia's minister of humanitarian affairs and disaster management Khadija Diriye warned that families could starve to death as they lose their livestock and slide deeper into poverty.

"I am particularly worried about children, women, the elderly and disabled people who continue to bear the brunt of Somalia's humanitarian crisis," she said.

Failed rains and flooding have caused widespread crop failures and piled pressure on livestock-dependent communities in Kenya and South Sudan this year.

The United Nations refugee agency UNHCR last month described the South Sudan floods as the worst seen in some areas since 1962, blaming the downpours on climate change.

General » Be a reporter: Write and send your article » Subscribe for news alert
Tags: Somalia, UN