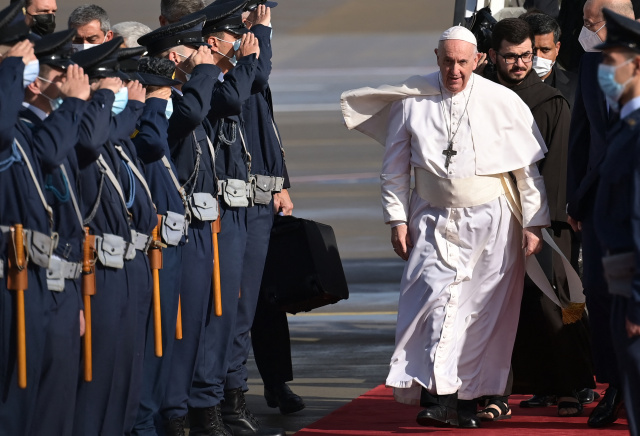 Pope Francis steps out of a plane upon his arrival in Athens airport on December 4, 2021. Pope Francis began a landmark trip to Greece with the first visit to Athens by a pontiff in two decades, aiming to improve relations with the Orthodox Church of Greece and highlight the plight of refugees. ARIS MESSINIS / AFP)

(AFP) - Pope Francis on Saturday began a landmark trip to Greece with the first visit to Athens by a pontiff in two decades, aiming to improve relations with the Orthodox Church of Greece and highlight the plight of refugees.

Flying in after a two-day trip to Cyprus, the pope landed shortly after 0900 GMT and was greeted at Athens airport by Greek Foreign Minister Nikos Dendias and senior officials from the Greek Catholic community.

The pope's trip will see him return on Sunday to the island of Lesbos, which he last visited in 2016 during the early years of the migration crisis.

The 84-year-old's visit to the Greek capital is the first by a pope since John Paul II in 2001, which in turn was the first papal visit to Athens since the 1054 Schism between the Catholic and Orthodox Churches.

Francis is seeking to improve historically difficult relations with the Orthodox Church -- strained by the Schism and the 1204 sack of Constantinople during the Fourth Crusade -- while also highlighting the plight of thousands of refugees and asylum seekers in Greece.

"I ardently long to meet you all, all, not only Catholics, but all of you," he said in a message before embarking on his 35th international trip, which began on Thursday with the visit to Cyprus.

"By meeting you, I will quench my thirst at the springs of fraternity."

Francis on Saturday will meet Greek President Katerina Sakellaropoulou, Prime Minister Kyriakos Mitsotakis and the head of the Church of Greece Archbishop Ieronymos.

He is then scheduled to see members of Greece's small Catholic community, which represent just 1.2 percent of the majority-Orthodox population.

General » Be a reporter: Write and send your article » Subscribe for news alert
Tags: Vatican, pope

Pope calls for 'urgent' response to climate crisis at COP26