An uncertain future for Seychelles? Study shows sea levels are at their highest in the past 6,000 years 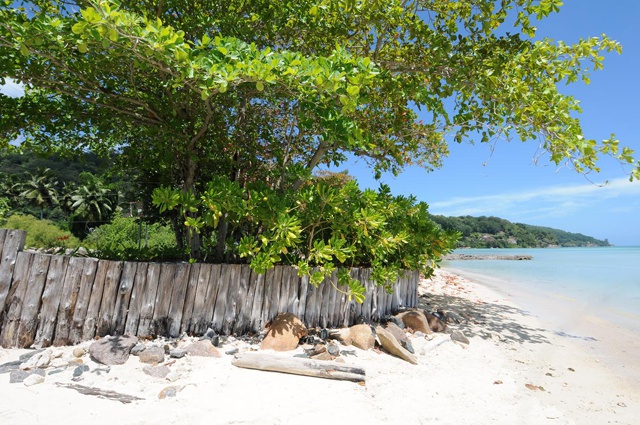 Rising sea levels are already a reality in Seychelles. Some areas of coastline have been rehabilitated to protect against further coastal erosion. (Patrick Joubert, Seychelles News Agency)

(Seychelles News Agency) - The pace of rising sea levels in the past hundred years has been unprecedented when compared with natural sea level fluctuations seen over the past 6,000 years. This is the conclusion of an extensive study published recently in the Proceedings of the National Academy of Sciences.

A group of researchers from Australia and Hong Kong carried out the study of geological sediments dating back up to 35,000 years across Australia, Melanesia, Asia and some sites as far afield as the western Indian Ocean.

The scientists discovered that although sea levels had been largely stable for the past 6,000 years, seas began to rise at an increasing pace since the beginning of the Industrial Revolution 150 years ago, when man’s scientific progress led to a huge growth in development and a corresponding population explosion throughout the world.

The rising sea levels are due to a rise in greenhouse gases, caused by the burning of fossil fuels, which has led to melting glacial ice and a general rise in temperatures. And as the rising atmospheric temperatures heat the oceans, they begin to expand, causing erosion on land as the sea begins to eat away at the shores.

For the past hundred years or so, sea levels have risen by about 20cm, which is more or less ten times what has been observed in average sea level oscillations over the previous 6,000 years.

Since glacial sheets from the last ice age began to melt around 16,000 years ago, rapid sea level changes were seen until the melting ended around 8,000 years ago, slowing down completely and becoming extremely stable around 2,000 years later.

Kurt Lambeck of the Australian National University, who was the lead author of the study, told SNA that a difference was recorded in the pace of sea level rise by comparing the geological record with temperature records from the past century.

“Broadly, the sea level we observe is consistent with what we observe about ocean temperatures and retreat of mountain glaciers, both over the last century,” he said. “These modern contributions are consistent with what our physics and chemistry show that if you add greenhouse gases in sufficient quantity to the atmosphere then you will get warming and sea level rise.”

“The basic science also tells us that the processes are not readily reversed and that even if today's emissions are cut back the consequences will be with us for some time to come, possibly a century or more.”

According to the 2014 assessment report by the United Nations' Intergovernmental Panel on Climate Change (IPCC), the world’s sea levels are predicted to rise 30 to 90 centimetres by 2100.

Is all hope lost for Seychelles?

Seychelles, an archipelago of 115 granitic and coralline islands in the western Indian Ocean, is very susceptible to land loss due to rising sea levels, particularly as around 85 percent of the development in the Seychelles occurs along its coastline.

Just a one metre sea level increase in Seychelles could submerge many of the Seychelles’ low-lying coralline islands and inhabited coastal areas on the inner granitic islands, resulting in up to a 70 percent loss of the country’s total land mass.

Scientists have been at odds over Seychelles’ prognosis for rising global sea levels since 2010, with one camp arguing that it should have a minimal effect on the islands and groups of other researchers categorically refuting those claims, saying that the Seychelles should be “really, really worried” about sea level rise.

One thing that is certain is the two natural sources of protection against rising sea levels; namely coral reefs and mangrove forests, are already in trouble. Both shield the islands against soil erosion and serve as breeding grounds and natural habitats for fish.

Dense coastal development on some of the shorelines of the Seychelles islands poses a very real risk to the natural mangrove forests. When sea levels rise, the mangroves will be unable to retreat further back to re-establish themselves inland because of existing buildings and roads.

As far as the corals go, elevated sea temperatures in the 1998 super El Niño event caused significant coral bleaching, which resulted in the mortality of large areas of coral reefs in the Seychelles. Further warming of the Indian Ocean has been predicted in the next 2014-2015 El Niño cycle, but on a less severe scale.

However, in a recent study, Australian scientists Nick Graham and Shaun Wilson believe that the coral reefs around the main islands of the Seychelles, which were almost completely destroyed by coral bleaching in 1998, are showing slow but definite signs of new growth.

According to the current scientific projections, global sea level rise is estimated at between 2 and 3 millimetres per year, and Professor Lambeck says this will also be true for the islands of the Indian Ocean, but adds that the ultimate impact on islands such as the Seychelles will depend on many other factors.

“In the past, reef growth will have kept up with such a rise, with corals growing upwards and outwards and trapping sediments to fill the space created for them by the rise,” he explained. “But if water temperatures rise so as to slow down reef growth, or ocean acidification increases, these past responses may not be valid today.”

“Also, they may result in weaker reef structures with less resilience to storms. This may well be the more important concern; that climate change may lead to more storm activity.”

Professor Lambeck has revealed that a separate study on sea levels during an earlier interglacial period, some 125,000 years ago, should be published soon. That study, led by another geochemist, Andrea Dutton, focuses on Seychelles as well as two other locations.

Despite this, Lambeck highlighted the need for further geological research on rising sea levels in the Seychelles.

“Seychelles is an important site because it is situated away from the former ice sheets and this simplifies the interpretation of any sea level data,” he told SNA. “Secondly, we consider the islands to be tectonically fairly stable, and thirdly, corals - which are (somewhat imperfect) recorders of past sea level - occur there.”

In the past 6,000 to 7,000 years, sea levels in the Seychelles appeared to have been almost constant and close to the present sea level. Professor Lambeck believes that this stability may have contributed to the formation of some of its lagoons, and thinks more research should be conducted on this time period.

However, Lambeck says that during the previous interglacial period, about 130,000 years ago, sea levels on the islands were around seven to eight metres higher than they are currently, meaning that many of the outer coralline islands were under water.

“This is still seen on some of the islands in the form of remains of corals in growth positions against the granites,” he said. “Much of the low-lying landscape of the granite islands would have been shaped at that time – other than subsequent human influence, of course.”

Lambeck is hesitant to make any predictions about the coming of the next ice age, even though the big freezes, which cover much of the Earth in sheets of glacial ice, do occur in fairly regular cycles of around 10,000 years between ice ages.

“This is an interesting question for those of us old enough to remember that 50 to 60 years ago it was widely thought that the planet was heading for another ice age,” he said. “Climate is cyclic on a large scale, driven by the orbital and rotational motions of the Earth-Sun-Moon system – with some minor pulls and pushes from the giant planets.”

Although the professor says that the current interglacial period has lasted roughly around 10,000 years, the normal duration until the next onset of an ice age, he said that what precisely controls the duration of the interglacial periods, and what kicks off the onset of glaciation is still poorly understood.

“I would not make any predictions about it other than to say that possibly we will see this happening in the next millennia or two,” but he added he did not think that we should rely on this eventuality to slow the progress of human-induced global warming.