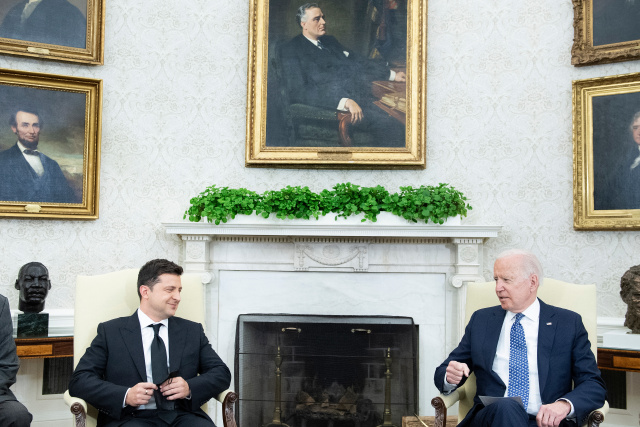 US President Joe Biden speaks to the press with Ukraine's President Volodymyr Zelensky before a meeting in the Oval Office of the White House September 1, 2021, in Washington, DC. Ukraine's President Volodymyr Zelensky is only the second European leader to meet President Joe Biden at the White House on Wednesday but his bid for more heavyweight US protection against a powerful Russia is likely to be frustrated. (Brendan Smialowski / AFP)

(AFP) - Joe Biden and Vladimir Putin will face off in a high-stakes video call Tuesday, with the US president aiming to convince his Russian counterpart to refrain from attacking Ukraine.

Washington and its European allies remain uncertain of whether tens of thousands of ground forces that Moscow has moved to Ukraine's borders are a genuine invasion threat or a bluff by the Russian leader.

Putin meanwhile says he wants guarantees that Ukraine will not become a member of the NATO alliance.

If he decides an attack on Ukraine is merited, the Russian leader risks a coordinated Western response that could aim to cripple his country's economy.

The United States and European allies are prepared to take "substantial economic countermeasures... that would impose significant and severe economic harm on the Russian economy" if Russia attacks, a senior Biden administration official told reporters on Monday.

On the eve of his virtual meeting, Biden spoke with the leaders of France, Germany, Italy and Britain, with the western powers expressing their "determination" that Ukraine's sovereignty be respected.

In their first direct conversation since July, the two presidents will have to negotiate a history of mutual suspicion.

Both want to put on a show of strength, which could leave little room for compromise during the talk, which kicks off at 10:00 am Washington time (1500 GMT).

Biden said Friday he would make it "very, very difficult" for Russia to launch any invasion of Ukraine.

The senior US official said that any Russian military action against Ukraine would be met with not only harsh economic penalties but also a buildup of US forces in Eastern Europe.

But the official stopped short of threatening direct intervention of American military force.

Such talk, the official added, "would be precipitous conflict saber-rattling, and we'd prefer to keep those communications with the Russians private."

Biden will make clear that there "will be genuine and meaningful and enduring costs to choosing to go forward should (Russia) choose to go forward with a military escalation," the official said.

"It's difficult to expect breakthroughs from the talks," Kremlin spokesman Dmitry Peskov said.

"Therefore let's at least hope that the leaders will be able to convey their concerns to each other," he said.

"Although our bilateral relations are still in a very sad state, there is still a revival, dialogue is beginning in some areas."

Biden and Putin have a full list of topics to discuss, from mutual talks on reducing strategic and nuclear threats, to the rise in cyberattacks that Washington says Moscow encourages, to persuading Iran to halt its nuclear program.

But Russia's massing of troops to the Ukraine border region -- estimated by Kiev at 100,000 -- has forced the virtual summit to focus on that one issue.

Moscow denies any bellicose intentions and accuses the West of provocation, particularly with military exercises in the Black Sea, which it sees as part of its sphere of influence.

And Putin wants a promise from the West that Ukraine will not become a part of NATO, the transatlantic alliance created to confront the former Soviet Union.

Putin meanwhile warned the West and Kiev against crossing the Kremlin's "red lines," including building up weaponry in Ukraine.

US State Department spokesman Ned Price indicated Monday that Washington wants Russia to back down and return to the 2015 Minsk Agreement aimed at halting the fighting inside Ukraine.

"We believe there is an opportunity, a window before us to resolve this diplomatically," Price said.

- Zelensky to the front -

Meanwhile the leader of the country at the center of it all, Ukraine's President Volodymyr Zelensky, donned a military helmet and body armor on Monday to visit troops on the eastern frontline who have been battling with pro-Moscow separatists since 2014, in a conflict that has claimed over 13,000 lives.

"Thank you for protecting the sovereignty and territorial integrity of Ukraine," he said, according to a statement released by his office.

On Monday he spoke with US Secretary of State Antony Blinken.

"Grateful to US, strategic partners & allies for the continued support of our sovereignty & territorial integrity. Nothing about Ukraine without Ukraine," he wrote on Twitter afterward.

General » Be a reporter: Write and send your article » Subscribe for news alert
Tags: US, Russia, Ukraine