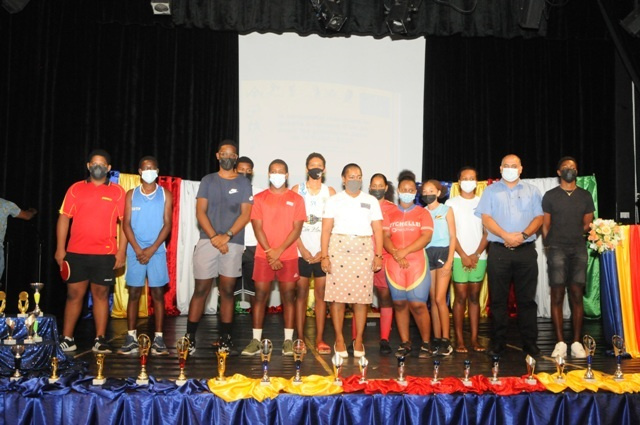 The ceremony launched Seychelles' participation in the games scheduled for December next year. (Seychelles Nation)

(Seychelles News Agency) - The countdown to the CJSOI Games -- an event that brings together young people from around the Indian Ocean for cultural and sporting events -- has been launched in Seychelles.

In a ceremony on Tuesday afternoon, Seychelles, through the Ministry of Youth, Sports and Family, which has the presidency of the Indian Ocean Youth and Sport Commission games, gave the kick start for the games, which are scheduled for December 2022. In French, CJSOI stands for the Commission de la Jeunesse et des Sports de l'Ocean Indien.

The 12th edition of the games was due to take place this year but was pushed back due to the COVID-19 pandemic. The games, targeting young people between 14 and 17 years old, are expected to be held in Mauritius.

Marie Celine Zialor, the minister for Youth, Sports and Family, also the president of the commission, said that more effort will be put in to raise the standard of the games to better prepare young people for other games held regionally and internationally, which would result in them bringing home medals.

"The government is engaged to bring hope for our young people," said Zialor, stressing that young people who lack discipline will not be supported, for she said discipline remains primordial in such events.

The CJSOI Games which are held every two years were introduced in 1994 by the Ministerial Committee of the Commission de la Jeunesse et des Sports e l'Ocean Indien.

Its objectives are to promote friendship ties between young people from member states and foster regional cooperation, sporting culture and development of young people.

The last Games were held in 2018 in Djibouti in which Seychelles had 80 athletes participating in five sports: athletics, football, handball, table tennis and petanque.

The member states of CJSOI include the Comoros, Djibouti, Madagascar, Mauritius, Mayotte, Reunion Island and Seychelles, a group of 115 islands in the western Indian Ocean.

In the commission's ministerial meeting held virtually in August this year, several changes to the games were discussed. One of the changes announced by Minister Zialor was to create better harmony between the CJSOI Games, Indian Ocean Island Games, Francophonie Games, All Africa Games, all the way to the Olympic Games.

"This will enable athletes to start preparing for the Olympics through these regional games, thus elevating the level of athletes who will now be discovered, trained and have their progress monitored through all these games," she said.

At Tuesday's ceremony, Zialor announced that more academic activities such as conferences to discuss issues such as climate change and the blue economy, which all the island member states can relate to, will also be incorporated in the event held every two years.

"We want to address topics that concern us as islands of the Indian Ocean. We want the youth to get the chance to discuss topics that affect them and that are pertinent to us," said Zialor.

The chief executive of the Seychelles National Youth Council, Penny Belmont, added that the youth component will also now include formal debate sessions within a parliamentary framework.

"Young people will not only discuss the issues but also make recommendations which they can submit to CJSOI for subsequent transmission to participating countries," said Belmont.